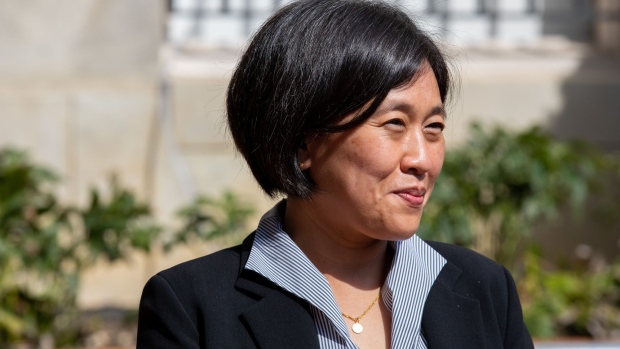 (Bloomberg) -- U.S. trade chief Katherine Tai reaffirmed Washington’s commitment to the World Trade Organization in a speech that marks the first time that the nation’s top trade official has visited the institution in half a decade.

“The Biden-Harris Administration believes that trade -- and the WTO -- can and should be a force for good that encourages a race to the top and addresses global challenges as they arise,” Tai said in remarks prepared for delivery in Geneva and provided by the office of the U.S. Trade Representative.

Tai’s remarks stands in contrast to her predecessor, Robert Lighthizer, who was a staunch critic of the WTO, played an active role in crippling its dispute settlement system and refused to visit the organization that he blamed for failing to curb China’s most egregious trade practices.

However, Tai did not offer a clear vision in her prepared remarks for rebooting the WTO appellate body, which previously had the final say in trade disputes that affected billions of dollars in international commerce.

Instead, Tai echoed Lighthizer’s criticism that the WTO’s dispute-settlement system had become a forum for nations to litigate trade concessions rather then negotiate them.

“Over time, ‘dispute settlement’ has become synonymous with litigation -- litigation that is prolonged, expensive, and contentious,” according to the text of her comments.

The Biden administration has maintained the its predecessor’s hold on appellate body nominations saying that the U.S. “continues to have systemic concerns” with the functioning of the panel.

The Trump administration paralyzed the WTO appellate body in December 2019 when it blocked all new appointments to the seven-member panel, saying it had overstepped its mandate.

Tai said the U.S. wants to create a “more flexible WTO, change the way we approach problems collectively, improve transparency and inclusiveness, and restore the deliberative function of the organization.”

Tai also urged WTO members to listen to each other more, “include new voices, find new approaches to problems, and move past the old paradigms we have been using for the last 25 years.”