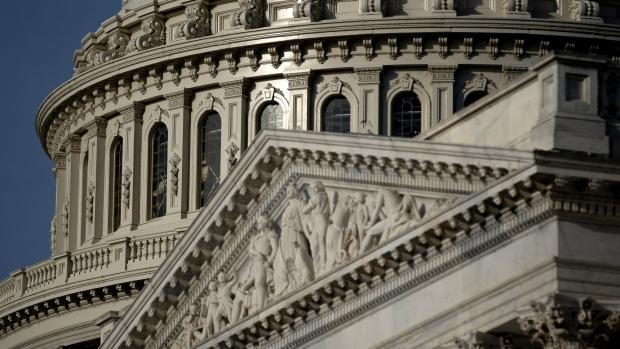 The U.S. Capitol in Washington, D.C., U.S., on Friday, June 25, 2021. The White House scored a political win by sealing a $579 billion infrastructure deal with a group of Democratic and Republican senators, yet the bipartisan plan faces hurdles in Congress that reflect challenges to his broader economic agenda. Photographer: Stefani Reynolds/Bloomberg , Bloomberg

(Bloomberg) -- The U.S. Senate unanimously passed a bill on Tuesday evening that will send more money to the Crime Victims’ Fund, which has seen a 35% drop in its coffers since 2019.

The CVF funnels dollars from federal criminal penalties and forfeitures to domestic violence shelters, legal services and charities across the country. The fund’s balance and appropriation have both significantly dropped in recent years because of lowered rates of prosecution during the pandemic and broader criminal justice reforms, according to data from a letter signed by nearly 2,000 service providers.

Congress’s revision to the Victims of Crime Act -- which now heads to President Joe Biden’s desk -- would add between $4 billion and $7 billion to the CVF by including revenue from deferred- and non-prosecution agreements. It would also raise federal reimbursements to state funds.

Money dried up for shelters when they needed it most. Some had to shutter or cut services as rates of domestic violence and abuse spiked during pandemic lockdowns, a trend have experts have called a “pandemic within a pandemic.”

Last week, a domestic violence program in Iowa said it would close three offices because of depleted CVF funds. Catherine Johnson, the director of the Guilford County Family Justice Center in North Carolina, said she has dealt with a 70% drop in state funding since 2018. The Center has continued to offer the same services, but some staff are leaving due to burnout.

“The demand and intensity for what folks are coming in and seeking increased at a time when resources were going down,” Johnson said. “The stress is pretty tremendous right now.”

Casey Gwinn, the president of Alliance for HOPE International, said the change to VOCA is “a great step forward,” but that Congress should pursue additional tweaks. Victims currently have to cooperate with law enforcement to receive compensation, a test Gwinn, a former city attorney, opposes.

“People are scared. People don’t know what’s going to happen when they engage in the criminal justice system,” he said. “I don’t think that should be a prerequisite to getting victim services.”