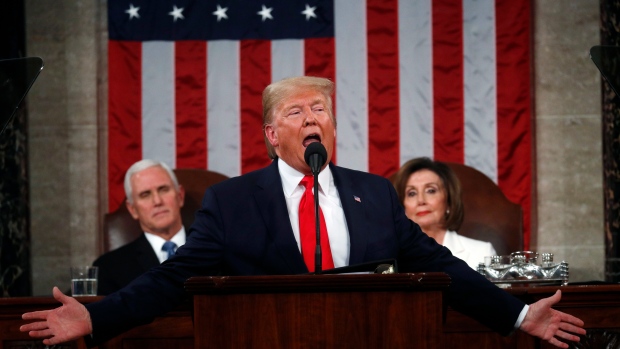 President Donald Trump delivers his State of the Union address to a joint session of Congress in the House Chamber on Capitol Hill in Washington, Tuesday, Feb. 4, 2020, as Vice President Mike Pence and Speaker Nancy Pelosi look on. , Leah Millis/Pool via AP

The U.S. Senate voted to acquit President Donald Trump on charges he abused his power and obstructed Congress, ending a historic, bitterly partisan fight and leaving the final judgment on his actions up to voters in November.

Trump became the third U.S. president to escape removal from office after being impeached by the House in December. Utah Senator Mitt Romney was the only Republican on Wednesday to break with his party and find Trump guilty of seeking a political favor from the Ukrainian government. He voted to clear the president of the obstruction charge.

The Republican-led Senate voted 52-48 to find Trump not guilty of abusing his power and 53-47 to find him not guilty of obstructing Congress.

“It is therefore ordered and adjudged that Donald John Trump be, and is, hereby acquitted of the charges,” Chief Justice John Roberts said to close the trial.

Wednesday’s final vote sends Trump into his re-election campaign emboldened and unrestrained by congressional checks on his actions. But it robs Trump and his allies of what they hoped would be a bipartisan acquittal on articles of impeachment brought solely by Democrats in the House.

Trump said on Twitter that he’ll address the public from the White House at noon on Thursday “to discuss our Country’s VICTORY on the Impeachment Hoax!”

Most Republicans accepted the bedrock argument by the president’s lawyers: that even if Trump held back security aid to pressure Ukraine’s president to announce an investigation into Democratic rival Joe Biden, it wasn’t sufficient cause to remove him from office.

Trump watched the vote in his private dining room near the Oval Office with senior staff members, including acting Chief of Staff Mick Mulvaney and Press Secretary Stephanie Grisham, according to two people familiar with his plans. The people described the mood as positive.

Trump later tweeted a video montage accusing Romney of being a “Democrat secret asset” and taunting him for losing the 2012 presidential election to Barack Obama when he was the Republican nominee.

The president previewed his post-impeachment pitch to voters Tuesday night in his State of the Union address, both highlighting his own accomplishments and disparaging Democratic policies and values. House Speaker Nancy Pelosi made no secret of her reaction -- she ripped the text of his speech in half.

Democrats are now left to grapple with the political impact of the impeachment they knew would probably fail to get the two-thirds majority in the Senate needed to remove Trump from office. Still, both parties will try to use impeachment fallout to sway voters for November’s election, when the White House and both chambers of Congress will be in play.

The Democrat whose re-election chances in November might hinge on his impeachment vote was Alabama’s Doug Jones. He voted to convict the president on both charges, which could cost him his seat in a state that voted overwhelmingly for Trump in 2016.

In a Gallup poll released Tuesday, Trump’s approval ratings rose to 49% -- a high for his presidency. Other opinion polls in the weeks leading up to the trial showed the public evenly divided on whether the Senate should remove Trump from office.

The Senate trial, which lasted just over two weeks, largely recounted familiar arguments from Trump’s defense team and the seven Democratic representatives prosecuting the House’s case. Roberts, as the presiding officer, played a largely ceremonial role in the trial, which began most days in the afternoon and often lasted late into the night.

The main uncertainty at the trial’s start was whether a simple majority of senators would vote to seek new evidence. A motion to subpoena documents and witnesses like former National Security Advisor John Bolton fell short on Friday.

Only two Republicans -- Romney and Susan Collins of Maine -- voted with Democrats to demand the evidence that the White House blocked from the House investigation.

Explaining his vote on the abuse of power charge, Romney said Trump’s pressure on Ukraine to investigate a political rival “was a flagrant assault on our electoral rights, our national security interests, and our fundamental values.”

“Corrupting an election to keep oneself in office is perhaps the most abusive and destructive violation of one’s oath of office that I can imagine,” he said.

Democratic leaders said the verdict in a trial without evidence doesn’t count as an acquittal at all. They warned that Trump will continue to seek foreign interference to help his re-election.

“The eyes of the nation are upon this Senate, and what they see would strike doubt in the heart of even the most ardent patriot,” Senate Democratic leader Chuck Schumer said just before the vote. “The president abused the great power of his office to try to cheat in an election, and the Senate majority is poised to look the other way.”

Trump’s lawyers countered that Democrats were out to “steal two elections,” as White House Counsel Pat Cipollone told the Senate, by voiding his 2016 victory and barring him from the ballot in November.

House Democrats have vowed to continue other investigations into Trump, even leaving open the possibility of subpoenaing Bolton, who said he was willing to testify in the Senate trial.

The fight over witnesses escalated last month after the New York Times reported that Bolton wrote in a book manuscript that Trump directly tied his decision to withhold $391 million in military aid from Ukraine to the effort to extract a a public announcement by President Volodymyr Zelenskiy that his government would investigate Biden and his son Hunter, who was paid to serve on the board of a Ukrainian gas company.

Bolton, who left the White House on bad terms with Trump, is calling his memoir “The Room Where It Happened,” a title that captures his direct knowledge of events in the Oval Office that most witnesses before the House impeachment inquiry recounted secondhand.

After the Bolton bombshell, Trump’s lawyers shifted their arguments. Celebrity attorney Alan Dershowitz and others argued that even if Bolton’s claims of a quid pro quo were true, Trump’s actions wouldn’t constitute an impeachable offense, provided that the president thought he was acting in the public interest.

Representative Adam Schiff, the Democrats’ lead manager, called the evolving legal strategy “a descent into constitutional madness” and likened it to Richard Nixon’s claim that if the president does something, it’s not illegal.

“The only reason you make that argument is you know your client is guilty and dead to rights,” Schiff told senators.

For Republican senators, 23 of whom face re-election this year, the political ramifications of the trial were inescapable. Fresh revelations from new witnesses could have tarnished the GOP’s standard-bearer and endangered GOP incumbents.

But any challenge to the president -- even on procedural matters -- risked a primary challenge and a backlash from the party’s fervently pro-Trump base.

Romney recognized that risk in his floor speech on Wednesday, saying he would be “vehemently denounced” for voting against the president. The reaction came quickly -- the president’s son, Donald Trump Jr. tweeted that Romney should be expelled from the party.

Even though Romney was the only Republican to vote against Trump, he wasn’t alone in condemning the president’s behavior. Collins, along with Lisa Murkowski of Alaska, Lamar Alexander of Tennessee and Ben Sasse of Nebraska, said Trump was wrong to solicit an investigation of the Bidens but his actions didn’t rise to the level of removing him from office.

Pelosi knew the odds of a conviction weren’t in her favor when she announced the impeachment inquiry in September. That was further confirmed a month later when not a single House Republican voted in favor of the ground rules for public hearings.

Pelosi initially resisted calls from within her caucus to pursue impeachment after Special Counsel Robert Mueller’s report on Russian interference in the 2016 election, warning that the case against Trump needed to be overwhelming and bipartisan to succeed.

Her calculus changed after a whistle-blower’s complaint revealed that Trump solicited a Ukraine probe into the Bidens -- and into a debunked theory that Ukraine, not Russia, interfered in the 2016 election. Trump’s July 25 phone call at the heart of that complaint came the day after Mueller testified to the House Judiciary Committee.

The disclosure of the whistle-blower’s report and Trump’s initial efforts to keep it from Congress had prompted a unanimous Senate resolution urging the president to turn it over to the congressional intelligence committees.

But that bipartisanship quickly faded. After Trump released a partial transcript of his July 25 call with Ukraine’s Zelenskiy, McConnell declared that the actions weren’t impeachable, and most Republicans fell into line.

By the time the House impeached Trump in December, McConnell had fleshed out his strategy. He argued that the impeachment was rushed, insufficient and partisan, and he said his goal was to quickly acquit the president and move on.

“If Washington Democrats have a case to make against the president’s re-election, they should go out and make it,” McConnell said Tuesday. “Let them try to do what they failed to do three years ago, and sell the American people on their vision for the country.”