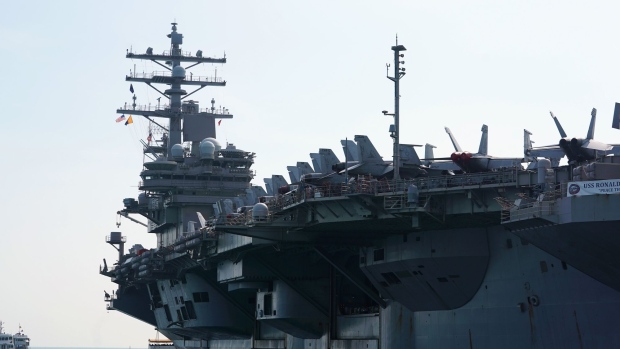 The USS Ronald Reagan, a Nimitz-class aircraft carrier and part of the U.S Navy 7th Fleet, sits anchored in Hong Kong, China, on Wednesday, Nov. 21, 2018. A trio of U.S. naval vessels anchored in Hong Kong on Wednesday, the first U.S. naval ships to harbor in the city since China barred entry to another American ship in September, in a sign of easing military tensions between the two powers. Photographer: Anthony Kwan/Bloomberg , Bloomberg

(Bloomberg) -- The U.S. is sending the USS Ronald Reagan and USS Nimitz aircraft carriers to the South China Sea for military exercises as China ramps up its own drills in the area, drawing protests from Washington.

Dual carrier operations and exercises are being conducted in “international waters of the South China Sea to support a free and open Indo-Pacific,” the U.S. navy said in an emailed statement that didn’t specify locations. The exercises won’t be conducted close to any of the contested islands in the region, CNN reported.

“The purpose is to show an unambiguous signal to our partners and allies that we are committed to regional security and stability,” Rear Admiral George M. Wikoff, commander of the strike group led by the USS Ronald Reagan, told Dow Jones in an interview.

Beijing has rejected claims that it’s doing anything out of the ordinary in the South China Sea and has indirectly accused the U.S. of trying to sow discord between China and Southeast Asian nations.