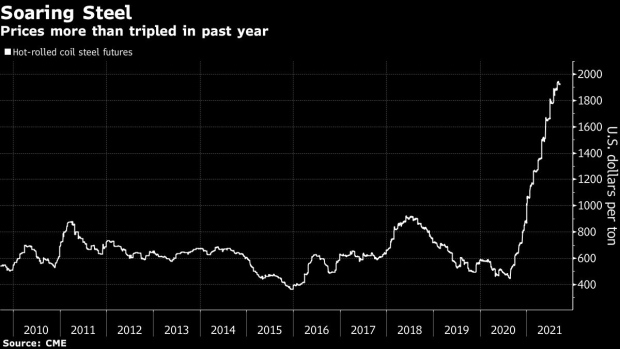 (Bloomberg) -- U.S. Steel Corp. will spend about $3 billion to build a new mill, the latest sign that steelmakers are growing more comfortable that higher prices will last.

The so-called mini-mill will combine two electric arc furnaces, which primarily use steel scrap and are far more energy-efficient than traditional integrated plants that are fed by coal. The company expects to begin construction in the first half of 2022 and start producing in 2024.

U.S. Steel’s announcement comes as domestic futures prices have more than tripled in the past year. While this has produced a windfall for domestic suppliers, it’s driving up the cost of everything from automobiles to wind turbines to kitchen appliances as the world recovers from the pandemic.

The company also estimated that it would report record earnings for the third quarter on the back of the strong prices, which will allow it to reduce debt.

The benefits of higher prices are being felt across the industry. Earlier Thursday, Nucor Inc., the largest U.S. steelmaker, said it expects record earnings through the end of the year, and Steel Dynamics Inc. on Wednesday forecast fourth-quarter earnings to be stronger than its previous guidance.

U.S. Steel characterized the planned mill, expected to produce 3 million tons of flat-rolled steel products, as part of the efforts to achieve its 2030 goal of reducing greenhouse gas emissions intensity by 20%, according to a statement.

The board has authorized an exploratory site selection process for the location of the mini-mill, according to the statement. Potential locations include Indiana and Illinois where U.S. Steel has existing EAF operations as well as greenfield sites.