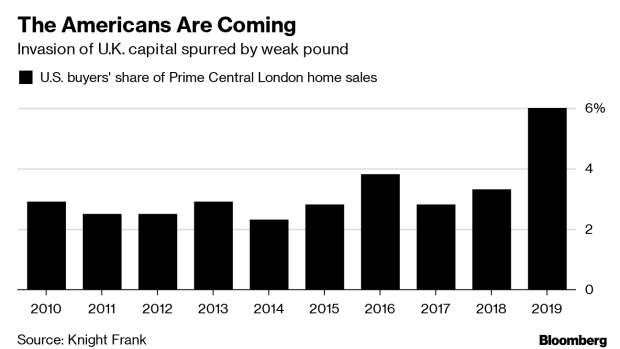 (Bloomberg) -- Hedge fund billionaire Ken Griffin isn’t the only American who thinks now is a great time to buy a London mansion.

The proportion of homes in London’s best districts sold to Americans has almost doubled so far this year compared to 2018, reaching its highest level in at least a decade, according to research by Knight Frank. American buyers are second only to those from China on the list of biggest overseas purchasers of real estate in the city’s prime postcodes, the broker’s data show.

Overseas buyers have benefited from a weak pound since Britain voted to leave the European Union, helping cushion the blow of increased sales taxes.

While much of London’s luxury housing market has continued to struggle over the past four years, there are signs that the most expensive homes are finding buyers willing to commit despite the Brexit uncertainty and benefiting from steep discounts. Ken Griffin negotiated a substantial reduction on the asking price when he bought a 95 million-pound ($120 million) house near Buckingham Palace in January.

“We have experienced high levels of interest from the North American market,” said Chris Richmond, head of sales at developer CIT Group Partners LLP, which is redeveloping a historic crescent overlooking London’s Regent’s Park into luxury homes and apartments. About “30% of the units sold to date have gone to American buyers” at the Regents Crescent project where prices start from 2.9 million pounds, he said.

In addition to the weak pound, the relatively benign impact of Brexit so far and the strength of the London economy over the past two-years have been major drivers of U.S. demand, Knight Frank global head of research Liam Bailey said.

“Over this period, London has taken the dominant share of U.S. corporate investment in Europe -- leading to a significant uptick in demand for prime property from relocating US employees, entrepreneurs and business owners -- especially from the tech sector,” he said in an email.

To contact the reporter on this story: Jack Sidders in London at jsidders@bloomberg.net