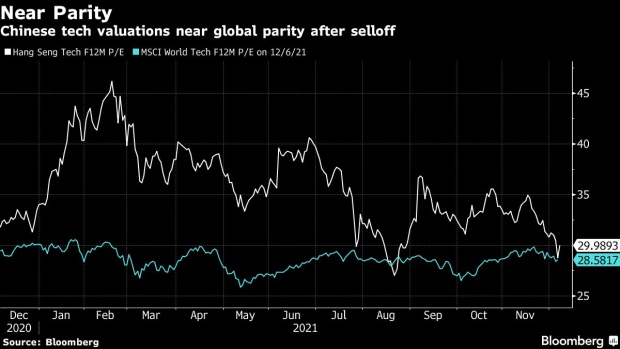 (Bloomberg) -- Chinese technology stocks are starting to look like a bargain after a regulation-driven selloff. And that could mean reduced flows into mega-cap U.S. tech -- or even outflows.

The Hang Seng Index has lost more than 20% since a mid-February peak thanks to concerns about the Evergrande default, a wider property bubble and regulatory crackdowns. Beijing’s desire to have tech companies list their shares domestically rather than in the U.S. has added pressure, as companies like Didi Global Inc. are pushed to delist from American stock exchanges and instead go public in Hong Kong.

China stocks have seen significant outflows, particularly in tech. The Nasdaq Golden Dragon Index, which holds American Depository Receipts of the Chinese tech companies listed in the U.S., has declined more than 50% since its February high. Meanwhile, the NYSE Fang+ Index -- which holds Chinese ADRs like Alibaba and Baidu as well as U.S. stalwarts Apple, Tesla and Nvidia -- has rallied 24% in the last 12 months.

Part of the reason for the Chinese tech selloff was the premium to access these stocks. And then there was the extreme regulatory risk as Beijing cracked down on the industry. By the time China’s yuan strengthened against the dollar in the back half of the year, the investments made little sense. Instead, the combination became a catalyst for flows into U.S. tech.

But now, the valuations of Chinese tech companies have dropped, and there are signs of fundamental growth in the country. Record import and export data, a reserve requirement ratio cut and strong demand for copper (which is highly correlated to the Chinese economy) all offer encouragement to China bulls. The question is will this mean U.S. tech starts to see outflows as investors head back overseas.