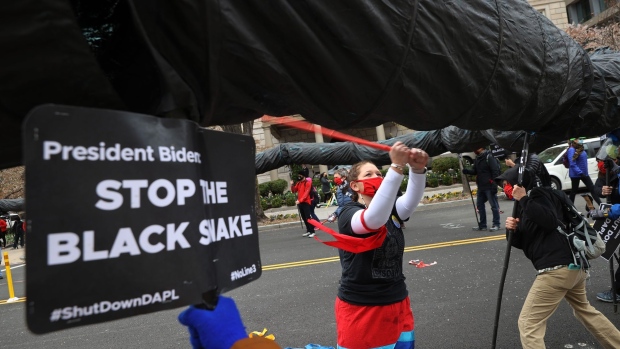 WASHINGTON, DC - APRIL 01: An indigenous environmental activists strikes a large symbolic snake near the White House as part of a protest against oil pipelines April 01, 2021 in Washington, DC. Organized by the Indigenous Environmental Network, the demonstrators called on President Joe Biden to 'Build Back Fossil Free' by stopping the Dakota Access and Line 3 pipelines. The protest against the pipelines began at the National Museum of the American Indian before moving to the Army Corps of Engineers headquarters and finishing near the White House at Black Lives Matter Plaza. (Photo by Chip Somodevilla/Getty Images) , Photographer: Chip Somodevilla/Getty Images North America

The Dakota Access pipeline that’s been at the center of a years-long battle between oil companies and the Standing Rock Sioux tribe won’t be forced to shut down while federal regulators conduct a new environmental analysis.

The Biden administration’s decision to allow the line to keep operating is a victory for pipeline owner Energy Transfer LP and drillers such as Continental Resources Inc. that use it transport crude from North Dakota’s Bakken oil field. The move will likely come as a relief to an oil industry beset by President Joe Biden’s aggressive climate campaign, which has included canceling the permit for the US$9 billion Keystone XL oil pipeline and pausing leasing on federal lands.

Justice Department lawyer Ben Schifman told the U.S. District Court for the District of Columbia that the federal government has authority to take enforcement action against Dakota Access --which could include a shutdown-- but won’t do so “at this time.”

Opponents of the pipeline, including several tribes that pushed the court to issue its own shutdown order, viewed Friday’s hearing as test of Biden’s commitment to Indigenous rights and climate action. Their motion for a shutdown is pending before the judge, who could issue a decision in the coming weeks.

At issue is whether the U.S.’s authorization of the 570,000 barrel-a-day crude pipeline overlooked key environmental concerns. An appellate court in January affirmed that the project’s approval by the Army Corp of Engineers was unlawful. The Army Corps won’t challenge that decision, Schifman said Friday, but Dakota Access will. Boasberg said he’d have to evaluate whether the company’s rehearing petition would affect his ability to rule on a shutdown.

Meanwhile, the Army Corps is conducting a court-ordered environmental impact statement that’s expected to conclude in March 2022, and is consulting with the Sioux tribes that oppose the pipeline, as well as the Mandan, Hidatsa and Arikara Nation, an-oil producing tribe in North Dakota that supports the project.

Energy Transfer, which is controlled by billionaire Kelcy Warren, jumped as much as 4.7 per cent in New York while Phillips 66 Partners, which owns a minority stake in the project, surged as much as 10 per cent. Continental climbed as much as 6.8 per cent.

An Army Corps official, Stacey Jensen, told pipeline opponents in a call Thursday that the agency wouldn’t seek to shut the line, said Dallas Goldtooth, an official with the Indigenous Environmental Network.

Jensen, who serves as assistant for regulatory and tribal affairs in the Corps office of Assistant Secretary of the Army for Civil Works, said in an interview that the matter is in the hands of the Justice Department.

“In a meeting with members of Biden’s staff earlier this year, we were told that this new administration wanted to ‘get this right,’” Standing Rock Sioux Chairman Mike Faith said in a statement Friday. “Unfortunately, this reported update from the U.S. Army Corps of Engineers shows it has chosen to ignore our pleas and stick to the wrong path.