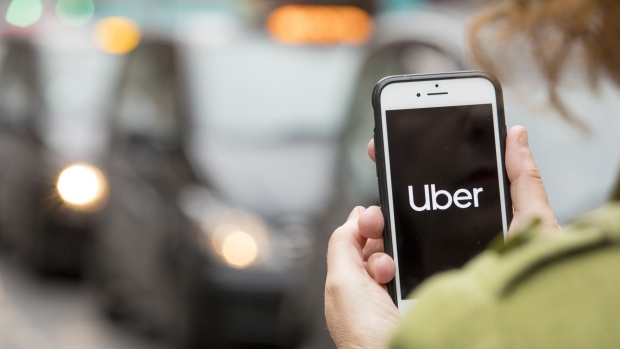 A commuter uses the Uber Technologies Inc. app on a smartphone in view of a line of black cabs waiting to pick up passengers in this arranged photograph in London, U.K., on Monday, Nov. 25, 2019. Uber lost its license in London for the second time in less than three years, putting one of its biggest markets outside of the U.S. at risk after the transport regulator said it failed to address safety concerns. Photographer: Jason Alden/Bloomberg , Bloomberg

Uber Technologies Inc. will eliminate 3,700 jobs and permanently close 180 driver service centers, the first in a series of cost-cutting measures to be announced in the next two weeks as a response to the coronavirus pandemic.

The reductions will affect 14 per cent of staff around the world, mainly those in support and recruiting, Dara Khosrowshahi, the chief executive officer, wrote in an email to employees Wednesday. Ridership is down significantly, and the company is maintaining a freeze on hiring, Khosrowshahi wrote in the email, which was reviewed by Bloomberg.

Of the more than 450 driver centers Uber operates worldwide, 40 per cent will shut down. The locations, called Greenlight Hubs, are used to sign people up to drive for Uber, teach them how to use the app and address issues that arise on the job. In March, as the virus was spreading in North America, Uber said it was temporarily closing all hubs in the U.S. and Canada.

Khosrowshahi signaled that more “difficult adjustments” would be put forth in the next two weeks. “Days like this are brutal,” he wrote.

This sort of painful day is becoming commonplace. Tech companies have eliminated more than 38,000 jobs in the past two months, according to Layoffs.fyi, which tracks the job market. Lyft Inc., the main alternative to Uber in North America, said last week it was dismissing 17 per cent of staff, furloughing more and reducing salaries. Their longtime peer in the sharing economy, Airbnb Inc., said Tuesday the company was cutting a quarter of its workforce.

The job losses are sudden for many, but at Uber, they may seem drawn out. After a disappointing initial public offering a year ago, Uber dismissed more than 1,000 employees over multiple rounds of cuts that extended from July to what Khosrowshahi described as a “last wave” in October.

They were part of a drive toward profitability, which was expected to arrive by the end of this year.

Uber has seen its landscape shift considerably since then. It instituted a hiring freeze in March, withdrew its financial forecast and wrote down some US$2 billion worth of investments in April and said Monday it would shutter food delivery operations in seven countries.

As of May 2, Khosrowshahi waived his salary for the remainder of the year, the company said. In 2019, he was eligible for a salary of US$1 million and a bonus of US$2 million, according to a securities filing. Uber is scheduled to report first-quarter financial results Thursday.

The challenges posed by the virus could be matched by a new one this week from Uber’s home state. California sued Uber and Lyft Tuesday for allegedly flouting a state law designed to give gig-economy workers the benefits of employees.

If the case is successful, the companies could be on the hook for substantial new costs that further jeopardize their business models.