Uber Technologies Inc. is spinning out Postmates’ delivery robot operation into a separate startup, marking another chapter in the ride-hailing giant’s attempts to narrow its focus and become profitable.

Uber will co-lead what’s likely to be a US$50 million investment in the new delivery startup, Serve Robotics, which will bring food, groceries and other items to Uber customers without human intervention. Uber will be a minority shareholder in Serve Robotics, the companies told Bloomberg.

The new startup will be led by Ali Kashani, who runs the robot deliveries unit for Postmates, which Uber acquired last year. Serve Robotics will start with about 60 employees and will be based in San Francisco, operating independently from Uber but retaining close ties with its former parent company.

Uber shares were up about 1 per cent in the first minutes of trading Tuesday. TechCrunch previously reported some details of the deal.

The startup plans to expand its current fleet of robots from dozens to thousands. “Over the next five years delivery robots will become the first commercial application of self-driving at scale,” Kashani said. “This is real.”

The move comes as Uber hurtles toward a self-imposed profitability deadline at the end of this year. Chief Executive Officer Dara Khosrowshahi has recently cut thousands of jobs and sold off a series of experimental projects. Those included Uber’s self-driving vehicle group, which was burning roughly US$500 million a year, and the company’s flying cars unit. But even as it sheds side projects, Uber has worked to ensure it will still have a hand in the new technologies -- securing board seats, commercial deals and ownership stakes that will benefit the company once the projects are commercially viable.

Serve Robotics will start with the small fleet of Postmates robots that can now be seen shuttling food around Los Angeles. But Kashani believes that Serve robots could make 5 per cent of food deliveries in the U.S. within five years. The company will continue to make deliveries through an ongoing arrangement with Postmates, an Uber spokesman said.

“This is not just building technology for a hypothetical customer,” said Ali Partovi, founder of venture firm Neo, which will invest alongside Uber in the upcoming funding round. “It’s plugging into a nationwide network of people placing orders and looking for deliveries.” Uber’s Khosrowshahi is an investor in Neo, Partovi said.

For Uber, taking a stake in Serve Robotics increases its sizable portfolio of venture investments, which already exceeds US$13 billion. While Khosrowshahi, a former investment banker with a taste for deal-making, didn’t invent this strategy he did refine it. When Khosrowshahi assumed the helm of Uber in 2017, he inherited shares in China-based Didi Chuxing Technology Co. and Russia-based Yandex.Taxi, with Uber agreeing to abandon business efforts in each region in exchange for stakes in the local ride-hailing leaders. Khosowshahi repeated the process in other markets where Uber trailed, selling operations in South East Asia to Grab and its food delivery business in India to Zomato. 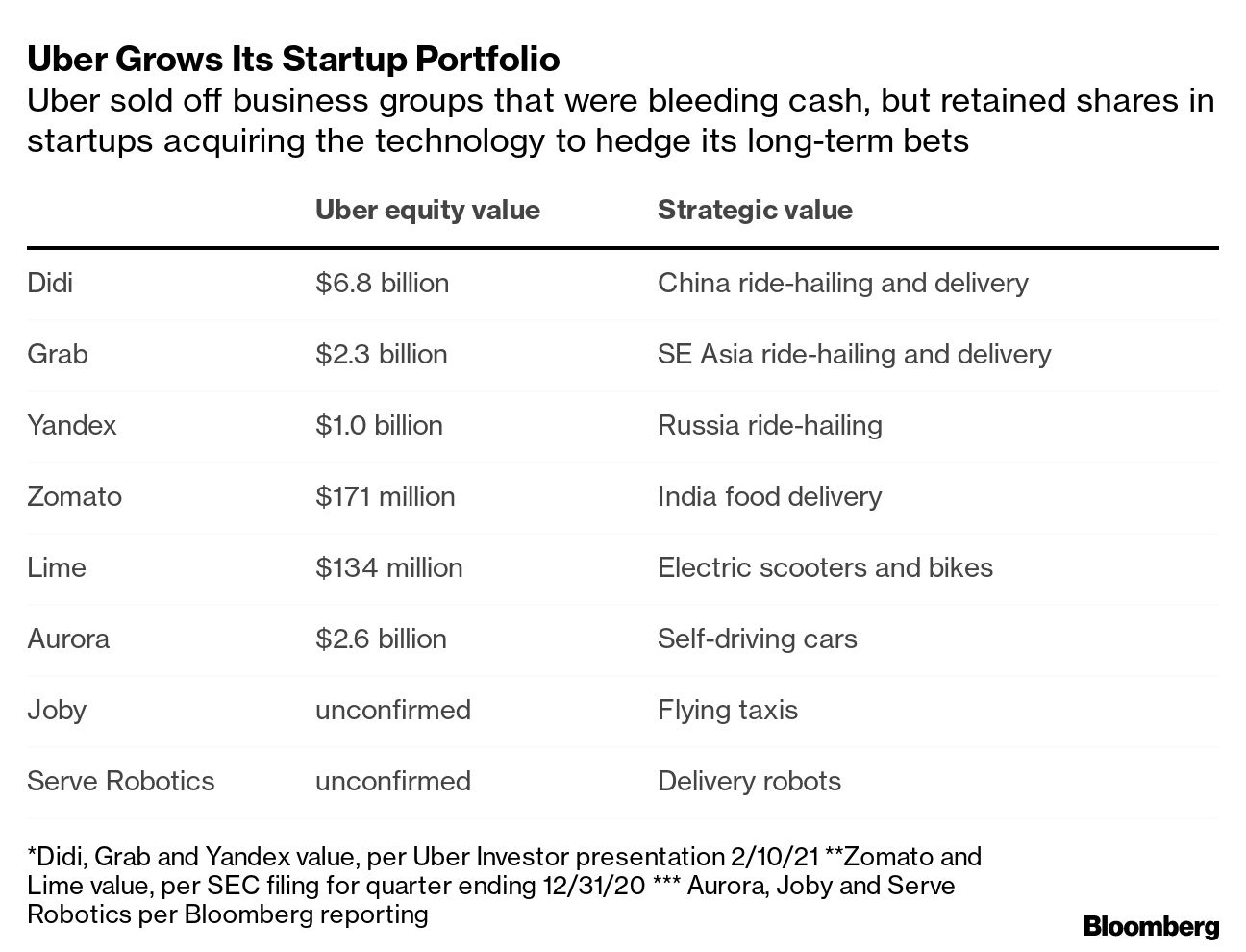 When the pandemic hit -- boosting Uber’s food delivery sales but decimating its ride-hailing business -- the company’s other bets looked increasingly like a liability. Under mounting pressure from investors to turn its first-ever profit, Khosrowshahi moved to unload even more units and make more investments. The company sold its electric bike division Jump to Lime, and led an US$170 million investment in the startup. In December, it sold is autonomous driving unit to Aurora Innovation Inc., and invested US$400 million. The next day, Uber announced it was selling its air taxi service Uber Elevate to Joby Aviation, and was boosting its investment in the startup to US$125 million.

Uber has an arrangement with Serve Robotics to act as both an investor and, through its relationship with Uber-owned Postmates, a major commercial partner. Food delivery was growing quickly for Uber even before the pandemic, but a surge in demand from shut-ins and a push to expand into delivering groceries, prescriptions, packages and more, helped increase sales 110 per cent in 2020. Getting robots to handle at least some of those deliveries could improve margins and help speed Uber’s progress to profit.

Postmates had previously partnered with convenience store Pink Dot. The company’s three robots, which will now be operated by Serve Robotics, are named Pinky, Dotty and Solly (named after Pink Dot CEO Sol Yamini). They have delivered thousands of sandwiches, drinks, cleaning supplies and other items in Los Angeles since late last year.

Pink Dot’s Yamini said although he was initially skeptical, a series of improvements to the robots -- including the ability to go down stairs -- means they can now handle roughly 70 per cent of all orders. Replacing human delivery drivers with robots is a goal, he said.

“We’re already paying so much for gas, payroll, worker’s comp, insurance on vehicles and payroll tax and it just keeps going up,” said Yamini, who operates 18 delivery-first convenience stores throughout Southern California. Robots “will help our bottom line.”