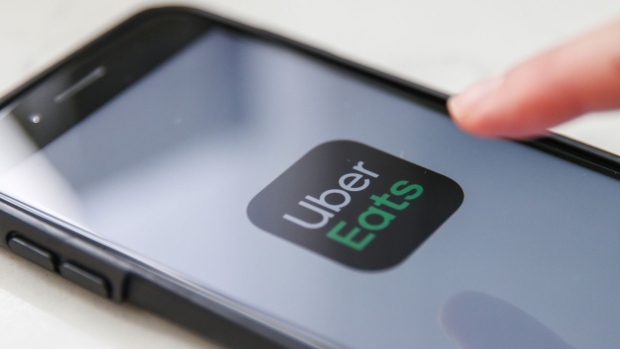 The Uber Eats logo is displayed on a smartphone in this arranged photograph in London, U.K., on Tuesday, Aug. 11, 2020. , Photographer: Hollie Adams/Bloomberg

Surging consumer demand for online ordering is driving San Francisco-based Uber to expand its local grocery offerings in Europe and the deal with Carrefour could be a prelude to a broader roll-out of such services in other European markets.

While Uber customers were already able to receive items from Carrefour in half an hour, the new service will allow consumers to get their delivery from so-called “dark store” locations operated by Carrefour-backed startup Cajoo within 15 minutes, according to a statement from the companies.

“The opportunity is massive,” said Eve Henrikson, Uber’s regional general manager for delivery in Europe, the Middle East and Africa. “I think the question is, how can you win in the sense of providing the best possible customer proposition with the best possible operating model.”

Bloomberg News previously reported Uber was looking for ways to tap into rapid grocery in Europe.

“I could see a number of countries for partnerships like this. The U.K. is one of them but I could see this model working in multiple markets in EMEA for us,” Henrikson added in an interview.

Earlier this year, Uber hired Henrikson from her role as Tesco Plc’s online director, as the ride-hailing company’s grocery orders surged 620% in the EMEA region in September from the year before. There were more than 9,000 grocery stores on the Uber Eats app across EMEA in September, a 400% increase from the prior year.

The new service, called Carrefour Sprint, will allow Parisians to order from a selection of about 2,000 items such as produce and cleaning products. Uber and Carrefour plan to expand the offering to other major French cities in the coming weeks.

Previously Uber has worked on rapid delivery in the U.S. in partnership with the fast-growing startup Gopuff.