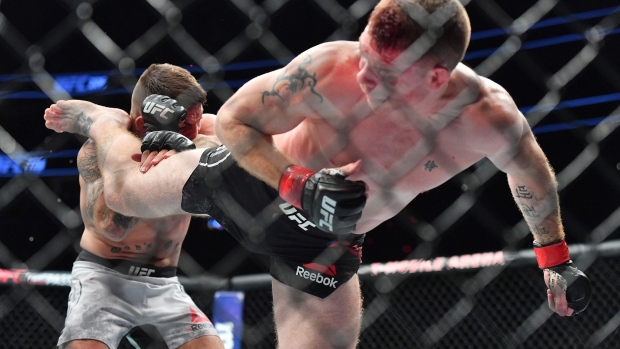 (Bloomberg) -- On Saturday, May 9, America’s live-sports industry, largely shuttered since March, will lurch back into action with a flurry of kicks to the stomach and punches to the head.

Inside VyStar Veterans Memorial Arena in Jacksonville, Florida, mixed-martial-arts fighter Sam Alvey, 34, will square off against Ryan Spann, 28, in the opening fight of UFC 249. Each of the night’s 24 scheduled combatants will have been tested ahead of time for the deadly coronavirus, as well as for antibodies.

If all goes according to plan, the UFC will follow up with two more fight nights at the arena on May 13 and May 16. At each performance, the arena’s 15,000 seats will be empty. To watch, fans will have to turn to ESPN. The network, owned by Walt Disney Co., will be exclusively showing the fights on its subscription streaming service ESPN+, on its cable channel and by pay-per-view for $65.

“We put together an approximately 25-page comprehensive health and safety operations manual that we submitted to the local regulators and the state boxing commission,” UFC Chief Operating Officer Lawrence Epstein said in a phone interview. “I’ve got the blessing of the governor and of the mayor of Jacksonville.”

The UFC has instructed its fighters, who will be staying at a nearby hotel, to leave their families and friends at home, and to bring no more than three people for their corner. At the hotel, they will be joined by a skeleton crew of cameraman, officials and staff, who will also be tested. According to Epstein, Quest Diagnostics Inc. has promised results within 24 hours. Additionally, everyone will undergo regular temperature checks and medical screenings.

During the fights there will be fewer than 150 people in the arena, Epstein said, or roughly half of the normal production crew. Everyone will be asked to maintain social distance whenever possible and not to mix beyond their own immediate work groups. After each fight, the contestants will be whisked outside for post-match interviews.

Despite such precautions, safety concerns persist. “There’s always going to be a chance that you miss an infection that’s incubating,” said Amesh Adalja, a senior scholar at the Johns Hopkins Center for Health Security. “You can minimize the risk, but it’s not going to be a completely risk-free activity.”

If it were up to the company’s president, Dana White, the UFC wouldn’t have waited this long to start fighting again. “I don’t give a sh-t about the coronavirus,” White, a longtime friend of President Donald Trump, told a reporter on March 8. UFC 249 was originally scheduled for April 18 at the Barclays Center in Brooklyn, New York. But in March, with the health crisis worsening, state officials banned mass gatherings.

White came up with an alternate plan to stage the fights at a casino on sovereign tribal lands in central California, where the events wouldn’t be subject to the state’s broader prohibitions on nonessential business activity. But after the state’s senior U.S. Senator Dianne Feinstein called it “not the right move,” Bob Iger, Disney’s executive chairman, initiated a series of discussions involving ESPN, the UFC and its controlling owner, the sports and entertainment conglomerate Endeavor about what to do, according to a source familiar with the matter. (Disney declined to comment). Eventually, the plan was scrapped. In a video clip, White suggested that he would move UFC events to a private island outside the U.S. where fighters and crew could be quarantined. “Fight island is real,” he declared.

Until fight island is ready, Florida will do.

On April 9, Governor Ron DeSantis amended the state’s stay-at-home order to include “employees at a professional sports and media production” as an essential service, opening the way for the UFC’s Jacksonville events.

Saturday night can’t come soon enough for ESPN. With college sports, the National Basketball Association and Major League Baseball on hiatus, the network is starved for live competition. It’s been surviving on a steady diet of game reruns and documentaries. While its 10-part Michael Jordan series “The Last Dance” is pulling in millions of viewers, ESPN is under increasing pressure to deliver live events. Roughly 85 million American households are paying nearly $8 a month for ESPN as part of their monthly cable bill. They were supposed to be getting the NBA playoffs this spring. Instead, they’re getting Korean baseball. In April, New York Attorney General Letitia James suggested that pay-TV carriers should give their customers a break. Carriers said they would be happy to so long as ESPN and other sports networks gave them one.

The UFC is one immediate way ESPN can get back to serving live fare. “Sports play an important role in people’s lives and can bring moments of escape in challenging times,” the network wrote in an emailed statement. “We look forward to bringing UFC to fans again.” ESPN is comfortable with UFC’s Florida plans, according to two people familiar with the matter, in large part because the state’s boxing commission is on board, which was not the case in California.

ESPN first signed on with the UFC in May 2018 when it agreed to pay $300 million a year for 20 events to put on its new subscription streaming service ESPN+ and another 10 for its cable channels. It was a big moment for mixed martial arts. If the house of Mickey Mouse was embracing cage fighting, the once marginalized sport was now officially mainstream.

From the start, the UFC provided ESPN with badly needed programming for its fledgling online service, as well as an influx of viewers who were accustomed to paying for content. Within a year, hundreds of thousands of fight fans had signed up for ESPN+, helping to push total subscribers past 2 million. “It’s a massive driver,” said Daniel Cohen of Octagon, a sports marketing agency. “It is incredibly important to the ESPN+ ecosystem.” Perhaps, even more so now. As long as most sports leagues remain on hiatus, the standalone service, which now has nearly 8 million subscribers, is especially vulnerable to customer churn. Customers can easily drop ESPN+ if it’s not carrying events they want.

Last year, ESPN and the UFC extended their existing deals by two years to 2025, making ESPN+ the exclusive U.S. distributor of UFC pay-per-view fights. The UFC is now largely a production company for ESPN. This year, the contracts call for 42 events, including 12 pay-per-views in return for half a billion dollars in fees, accounting for roughly 70 percent of UFC’s annual revenue.

UFC’s owners at Endeavor could use the TV and streaming cash. Since the start of the pandemic, Endeavor has been hit especially hard by the shutdown of large gatherings of fans. Almost everything it does — from college sports to media rights to live events — has been negatively impacted. Last month, the company announced that up to a third of its staff of 7,500 would either be furloughed, laid off or get a pay cut. The ratings agency S&P Global downgraded Endeavor’s debt to junk, citing “a high level of uncertainty surrounding event-and-entertainment-based revenue streams due to the spread of the coronavirus.” All of which comes just six months after the company officially withdrew its plans to go public, along the way revealing $4.6 billion of long-term debt, nearly half of which it took on to finance its acquisition of the UFC in 2016.

At the time of the acquisition, UFC was generating more than $150 million in profit annually, according to a memorandum circulated for the $4 billion sale, with gross margins of around 30 percent. Endeavor’s plan was to drive those numbers higher by cutting costs and by inking more valuable media-rights deals. Until the coronavirus hit, the strategy was working. The UFC was scheduled to pay $300 million in dividends to Endeavor and its other owners this year.

Now, the second half of the payout is on pause, and Endeavor is lining up new investors to step in if need be, according to a source familiar with the matter. Endeavor may have to call on its majority owner, private equity firm Silver Lake Partners, for additional cash. “UFC has a firm, long-term contract with ESPN that gives us various protections with regards to rights fees and content they continue to use,” Endeavor President Mark Shapiro said in an interview. “We don’t need to rush a live fight right now to satisfy that contract.”

UFC said it plans to get in its full slate of events, regardless of the disruption. “We’re very confident we’re going to be able to deliver everything that we were supposed to deliver to ESPN in 2020,” said Epstein.

Unlike other U.S. sports leagues, he noted, the mixed-martial-arts promotion doesn’t have to deal with dozens of teams and owners spread across the country. It also doesn’t have to worry about players’ unions. Its fighters negotiate individually and don’t get paid if they don’t step into the Octagon.  “We’re able to move pretty quickly,” said Epstein.

And the status of fight island? “It’s absolutely something that’s real, and we’re working on the logistics right now,” said Epstein.