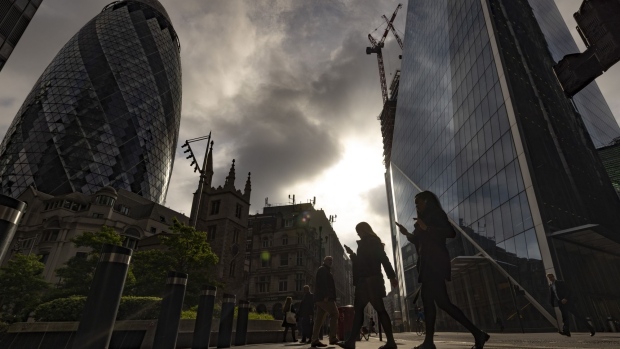 Wage growth in Britain jumped in the first quarter, fueled by an increase in bonus pay despite a call from the Bank of England for restraint.

Average weekly earnings surged 7% in the three months through March, the Office for National Statistics said Tuesday. That was stronger than the 5.4% figure economists had expected, mainly due to an increase in bonus payments. In March alone, pay climbed 9.9%, the most since records began more than two decades ago.

BOE Governor Andrew Bailey on Monday repeated his call for higher paid workers to “think and reflect” about asking for more money, saying that the strength of wage growth is adding to concerns about inflation. It’s one of the factors likely to drive interest rates higher, further squeezing the finances of those at the bottom of the earnings scale.

“In the situation we are in, which is very difficult for low-income households and particularly difficult where inflation is concerned on things like energy and food, it’s important to bear that in mind when you are thinking about these things,” Bailey said at a hearing in Parliament on Monday.

Average earning excluding bonuses rose 4.2% in the quarter through March, about the same as the month before and well below the rate of inflation.

Unions have criticized Bailey’s call for pay restraint, noting that most of the inflationary problem is coming from energy and goods prices.

“It is unbelievable that the Bank of England has repeated its calls for workers to take a wage hit,” said Paul Nowak, deputy general secretary at the Trades Union Congress. “The last thing working people need right now -- in the middle of the worst living standards crisis in generations -- is to have their wages held down.”

A 30% jump in bonus payments in the quarter reflected a continuing shortage of workers. They were entirely driven by the private sector, with services, construction, retail and hospitality posting the strongest gains.

In his evidence to the Treasury Committee on Monday, Bailey noted that demand for staff means generous bonus payments are no longer confined to the financial-service sector.