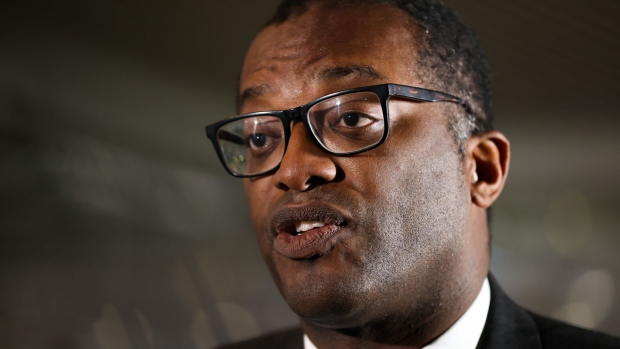 A British Union flag, also known as a Union Jack, flies from a tourist souvenir stall on the bank of the River Thames in view of the Houses of Parliament in London, U.K., on Monday, Oct. 28, 2019. The European Union looks set to grant the U.K. a delay to Brexit until Jan. 31, prolonging the uncertainty for businesses and citizens but removing the risk of a damaging no-deal split on Thursday. , Bloomberg

(Bloomberg) -- The UK needs to cut 200,000 government jobs over the next couple of years to avoid adding billions to the national debt, according to the Institute for Fiscal Studies.

Public-sector wages are on track to increase 5% this year, around half the current rate of inflation but higher than budgeted when spending plans were drawn up in 2021.

Simply to pay for those awards without increasing borrowing, the government will need to find £5 billion ($5.6 billion) of savings this year alone, the think tank said Saturday.

The analysis underscores the challenge Chancellor of the Exchequer Kwasi Kwarteng faces to keep the public finances under control without reversing any more of his tax-cutting pledges. Pressure is coming not just from his tax giveaways but also from higher spending, complicating any plan to stabilize debt as a share of GDP.

Last month, Kwarteng announced a £45 billion tax stimulus that sent the markets into a tailspin on concerns that borrowing would spiral out of control.

On Nov. 23, he plans to unveil a full fiscal plan with a forecast from the Office for Budget Responsibility that will incorporate government policies and the impact of changes to the economic outlook. The Treasury may bring the date forward.

The IFS said about 100,000 job cuts this year would ensure the overall wage bill was unchanged, and avoid cuts elsewhere in departments. If pay increases with inflation in 2023, the government would need to cut another 100,000 jobs to keep the bill in check.

Departments have been told to find internal “efficiencies,” which is often seen as code for job cuts. There is a potential opportunity as the public-sector workforce grew by 250,000 over the pandemic to around 5.5 million.

The government is already pushing through plans to cut around a fifth of the 500,000-strong civil service, those who work directly for the government. It says the headcount reduction could save £3.5 billion a year.

Kwarteng scrapped a tax cut for the richest households that saved £2 billion of the £45 billion but has pledged not to reverse other policies.

He has refused to rule out a £5 billion reduction in benefits, which has prompted a backlash within the ruling Conservative Party as it would hit those who can least afford it during the cost of living crisis.

The government may also be considering plans to change the treatment of the Bank of England’s quantitative easing program to reduce the annual debt-interest bill by £5 billion or more.

Public-sector workers, including nurses and teachers, are threatening the strike over poor pay -- putting even more pressure on spending.

Bee Boileau, research economist at the IFS, said there are no “easy options” for the chancellor.

The analysis is from a pre-released chapter of the 2022 IFS Green Budget, produced in association with Citi and with funding from the Nuffield Foundation.