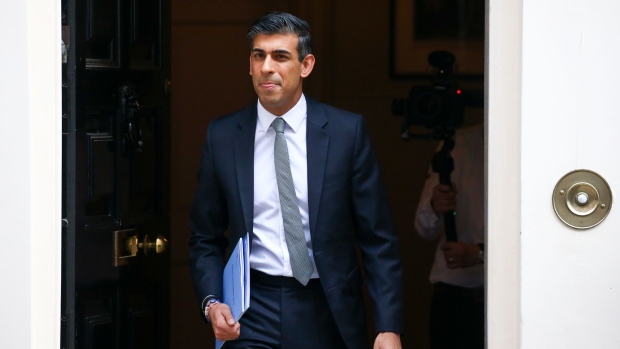 Rishi Sunak, U.K. chancellor of the exchequer, departs on his way to present the spring statement to Parliament in London, U.K., on Wednesday, March 23, 2022. Sunak is due to give his spring statement amid pressure from his own MPs to announce new support to help Britons through a growing cost-of-living crisis. , Bloomberg

(Bloomberg) -- Chancellor of the Exchequer Rishi Sunak has ordered officials to prepare plans for a possible windfall tax on power generators as well as oil and gas firms, according to the Financial Times newspaper, citing unidentified government sources.

The plans will target more than 10 billion pounds ($12.6 billion) of excess profits for electricity generators, including wind farm operators, although no decision on whether to impose the levy has been made yet, the FT said.

Sunak and Prime Minister Boris Johnson are under pressure to offer more support to Britons grappling with soaring prices, fueled by the hike in energy costs. The idea of a windfall tax on energy firms, who have been pocketing massive profits as a result, is gaining political support but ministers are worried it risks deterring investment.

Sunak has for weeks said he may impose the one-time levy if companies fail to make a “significant investment,” though the government is yet to set clear targets for firms to meet. A Treasury spokesperson told Bloomberg no options are off the table.