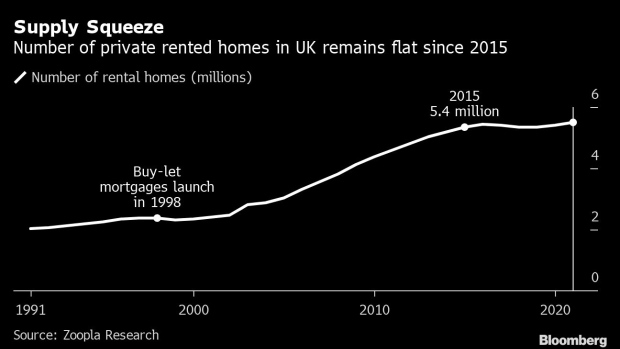 (Bloomberg) -- Britons moving into a rental property have seen prices soar at twice the pace of wages in the past year, with no sign that the red-hot market will slow down soon.

The cost of a new rental agreement rose 12.1% in the 12 months to October, according to a report from property portal Zoopla. That compares to 6% annual growth in earnings in the three months through September.

Renters who stay in the same property faced gentler price hikes, with an average rise of 3.8% over the year, Zoopla said.

Still, for those who moving house, there is more pain to come.

Rental enquiries per estate agency branch are now 46% above the five-year average, while the number of homes for rent has barely risen since 2015. Mortgage rates, which soared to 14-year highs in the aftermath of the September mini-budget, have increased costs for many landlords and discouraged others from renting out properties.

“Renters are paying the price for low levels of new investment in private rented housing,” said Richard Donnell, executive director at Zoopla. “A chronic lack of supply is behind the rapid growth in rents, which are increasingly unaffordable for the nation’s renters.”

If rents rise at the same pace next year, tenants will need to hand 37% of their earnings to their landlords, according to Zoopla. However, rents are more likely to rise by about 5% due to the impracticality of piling even more pressure on tenants’ budgets, the report added.

“We will see the rental market reach a tipping point where the average monthly rent can’t go up any more and still be affordable,” said Michael Cook, group managing director for UK letting firm Leaders Romans Group. “The knock-on effect of this is that landlords will not receive monthly payments from tenants, which will impact their ability to pay their mortgages.”