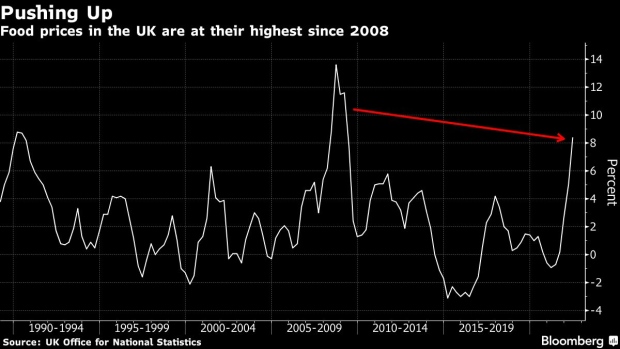 (Bloomberg) -- British supermarkets are taking a hit in the credit markets after inflation accelerated to the highest in 40 years.

UK inflation is running hotter than that of Western European counterparts, with sterling weakness, Brexit-related supply chain issues and soaring energy prices all contributing. Supermarkets are among sectors seeing the biggest impact, as price rises for essentials like dairy, meat and vegetables are difficult to pass on to already-squeezed consumers.

“Retailers generally are in a low margin business where you’re going to have a hard time passing on costs quickly,” said Kyle Kloc, a portfolio manager at Fisch Asset Management. Deteriorating relations with Brussels may exacerbate the issue if UK import duties go up, he said.

Yields on Asda’s most liquid bond, maturing in February 2026, rose as much as 31 basis points, to 9.2%, since Wednesday’s inflation data, while borrowing costs for Iceland Foods and Tesco also jumped. Yields for supermarkets’ bonds have pulled back slightly from July’s all-time highs, but have doubled in the last nine months while the UK’s economic situation has deteriorated.

The squeeze on consumers -- and supermarkets’ bonds -- comes at a time when some British grocers are already loaded up with debt following private equity takeovers.

Clayton, Dubilier & Rice’s 6.6 billion-pound ($7.95 billion) leveraged buyout of Wm Morrison Supermarkets Plc last year was the largest of a British company in more than a decade, with banks still trying to offload part of the debt in souring market conditions. And the acquisition of discount grocer Asda by Zuber and Mohsin Issa and TDR Capital, also last year, loaded up the grocer with over 3 billion pounds of debt.

The additional debt meant that both supermarket chains were subsequently downgraded by credit ratings agencies into junk territory, pushing up their borrowing costs even before the cost of living crisis gripped the UK.

“In this economic cycle, we’re going to see a lot more divergence between retail names,” said Gordon Shannon, portfolio manager at TwentyFour Asset Management. “Being in a weaker (debt) position, lower quality and worse rated will definitely be punished.”

Going into the winter, Britons face soaring bills to heat their homes on top of food-price rises. That means borrowing costs for supermarkets are unlikely to improve anytime soon.

For food costs, “the bad news is that there’s probably more to go,” said Deutsche Bank economist Sanjay Raja. After a “staggering” 11.6% increase in grocery prices over the past four weeks, according to Kantor, “our models point to a further surge over the coming months to around 12.5% year-on-year,” he said.

Raja doesn’t anticipate any meaningful drop in food prices until the second quarter of 2023.

Financials are leading Thursday’s issuance activity, with Banco Santander SA, Lloyds Banking Group Plc and Credit Agricole SA among seven issuers raising at least 4.5 billion euros. That will push the week’s sales tally to at least 20 billion euros and the highest in eight weeks, according to data compiled by Bloomberg.

The US high-grade summer sales surge continued with nearly $8b sold on Tuesday, driving August volume to over $100b. This is the third time on record August has topped that mark as companies take advantage of lower borrowing costs compared to earlier this year and an investor base hungry for new paper.