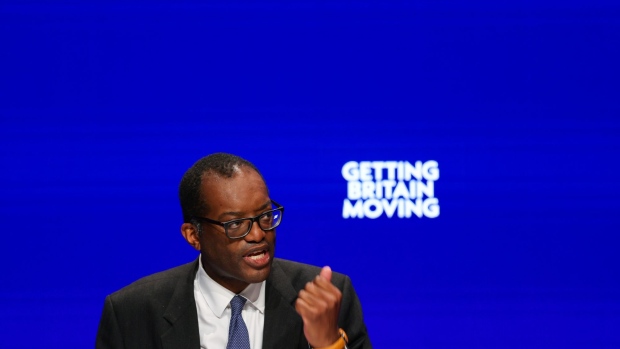 Kwasi Kwarteng, UK chancellor of the exchequer, delivers his keynote speech during the Conservative Party's annual autumn conference in Birmingham, UK, on Monday, Oct. 3, 2022. Liz Truss is standing by Kwarteng after the threat of a rebellion in the ruling party forced them into a humiliating reversal on a plan to cut taxes for the top earners in the UK. , Bloomberg

(Bloomberg) -- Chancellor of the Exchequer Kwasi Kwarteng said he’s sticking to plans to release a new medium-term strategy for the economy on Nov. 23, pushing back against reports that he’d decided to bring the timing forward.

“People are reading the runes and parsing words,” Kwarteng told GB News on Tuesday. “It’s going to be the 23rd.”

Kwarteng’s remarks come after government officials told Bloomberg and other news outlets on Monday that he would accelerate publication of the plans, alongside economic forecasts from the government’s fiscal watchdog, the Office for Budget Responsibility -- in order to calm rattled markets.

That had appeared to mark the government’s second U-turn in a day on its plans for the economy, after the chancellor reversed plans to scrap the top rate of income tax to stem market and political fallout.

The revelation now that he’s sticking to the original date is likely to upset members of his party who’d said a faster timetable was needed to explain how the government will pay for its Sept. 23 fiscal package, the largest set of unfunded tax cuts in half a century.

Treasury Select Committee Chairman Mel Stride -- a member of the ruling Conservatives, had urged Kwarteng to ensure his new plans are public before Nov. 3, when the Bank of England is due to make its next decision on interest rates. On Monday he’d professed his delight on Twitter when it appeared the chancellor had acceded.