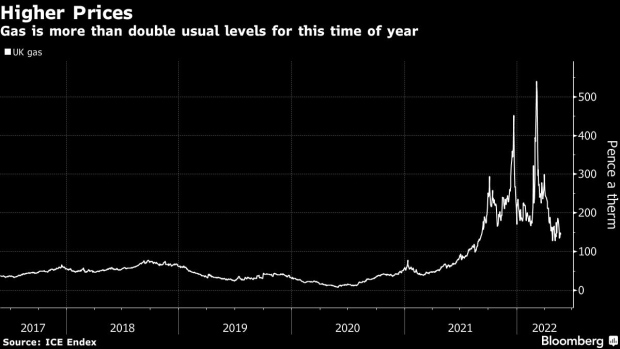 Cooling towers at Uniper SE's coal-fired power station in Ratcliffe-on-Soar, U.K., on Thursday, Dec. 2, 2021. The recent drop in prices for coal and U.S. gas, as well as limited interest for LNG cargoes from some buyers in Asia, opened the way for added supply into Europe. , Bloomberg

(Bloomberg) -- The UK left the door open to extending a windfall tax on power generators, but it’s an option seen as difficult to implement and a threat to green investment.

There’s no timings yet for such a measure, a government official said in response to a story in The Times that it could happen within weeks. The idea of a tax on power producers’ profits was floated early this week but didn’t make it into Thursday’s £15 billion ($19 billion) energy policy package, which included a windfall levy on oil and gas companies.

A tax on power profits would be particularly complex as generators sell most of their output in advance, which means the impact of higher prices has yet to be fully felt by many operators. Also, some fossil-fuel stations only fire up when needed to fill the gaps in supply when it’s not windy, briefly earning very high prices for the service. Yet another concern is that windfall duties will discourage investment in technology needed for the transition to a low-carbon economy.

“Designing a mechanism that is workable, fair and proportionate will be extremely difficult, and most likely be subject to legal challenge if implemented,” said Martin Young, an analyst at Investec Bank Plc. “The possibility of a windfall tax on generation is something we firmly believe is a negative step for the pathway to net zero, and if implemented will cost consumers through higher returns being required for investment.”

Chancellor of the Exchequer Rishi Sunak said Thursday more work needs to be done on the idea.

It’s not clear whether renewable generators would be included or not. While oil and gas producers got tax breaks for new projects to cushion the blow of their 25% windfall tax, there were no concessions given for investment in North Sea wind farms. Prime Minister Boris Johnson has set a target to more than triple offshore wind capacity and can’t afford to discourage investment.

The government said it stopped short of a levy on power producers because it was consulting on measures that could reduce the impact of soaring natural gas costs on record-high power prices. These reforms could include changing the marginal pricing model, where power prices are determined by the most expensive generation technology -- currently gas.

While most most power producers have sold their output in advance, they can still unwind deals and resell closer to real time. Either way, it’s consumers that pay very high prices and the profit going back to renewable and nuclear generators far exceeds their cost to produce, according to Rob Gross, a director at the UK Energy Research Centre.

Renewable and nuclear generators, which aren’t exposed to high fuel input costs, “may enjoy windfall profits over the next two to three years,” according to Peter Bisztyga, a research analyst at Bank of America. “We would not rule out such a tax being implemented in the future.”

It’s also not clear how the UK’s energy support package will be funded, something that “bodes risk for UK electricity generators,” said Ahmed Farman, an analyst at Jefferies Group LLC.

If a windfall tax came with relief on new investments similar to that provided to oil companies, it could provide some shelter for utilities with big spending plans like SSE Plc, RWE AG and Iberdrola SA. Drax Plc and Centrica Plc will be the most at risk, he said.