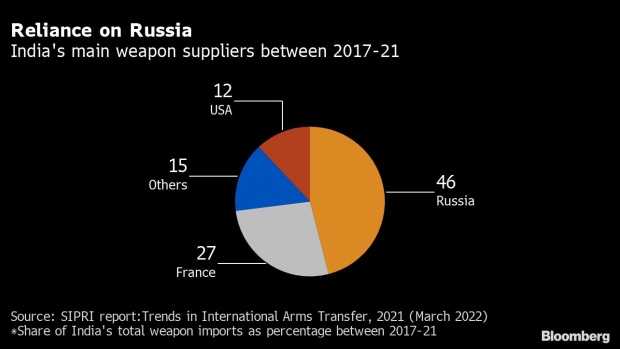 The US is preparing a military aid package for India that aims at increasing security ties and reducing its reliance on Russian weapons, people familiar with the matter said.

Ukrainian President Volodymyr Zelenskiy broadened his appeals to the outside world by speaking via video link at the opening of the Cannes film festival, where he referenced Charlie Chaplin’s film about Nazi Germany -- “The Great Dictator.”

The European Union will propose some 9 billion euros in loans to cover Ukraine’s urgent bills as part of a financial package to support the war-torn country, two EU officials said.

The bloc on Wednesday will also propose a new joint debt plan and using seized assets from sanctioned oligarchs to rebuild the nation. Kyiv needs around 15 billion euros over the next three months and the war costs could surpass one trillion euros, the Ukrainian government said.

Sweden and Finland submitted their applications to join the NATO military alliance in Brussels on Wednesday, marking the start of a process that would fortify Europe’s defenses and make it more secure in the event of Russian threats to the region.

“This is a good day at a critical moment for our security,” North Atlantic Treaty Organization Secretary General Jens Stoltenberg told reporters. “This is a historic moment which we should seize.”

“We have every interest to anchor Ukraine in the European family,” Schallenberg said. But we know that an entry process lasts years, if not decades, he said. Austria’s top diplomat said discussions over Ukraine’s membership cannot ignore the aspirations of other countries, including North Macedonia and Albania.

Japan, a neighbor of Russia, isn’t a member of the security bloc and Kishida would be the first sitting Japanese premier to attend the gathering.

Read more: Why Japan Will Struggle to Do Without Russian Energy: QuickTake

Australia has sanctioned 11 individuals and 12 entities for promoting Russian propaganda and disinformation, building on the measures already taken against 32 propagandists in March, Foreign Minister Marise Payne said in a statement.

The US military aid package under consideration would include military financing of as much as $500 million, according to one person, which would make India one of the largest recipients of such aid behind Israel and Egypt. It’s unclear when the deal would be announced, or what weapons would be included.

Read more: US Seeks to Wean India From Russia Weapons With Arms-Aid Package

India is the world’s largest buyer of Russian weapons, although it has scaled back that relationship of late. Its dependence on Russia for weapons against neighbors China and Pakistan is a big reason Prime Minister Narendra Modi’s government has avoided criticizing Russian President Vladimir Putin over the war in Ukraine.

President Zelenskiy, a former actor and producer, urged the world of cinema to help fight for freedom and battle a “dictator” in his address to the Cannes film festival, citing the need for a new Charlie Chaplin.

“As then, there is a war for freedom,” he said, adding, “words are needed to sound like in 1940 from all screens of the free world.”

Separately, in his nightly video address to Ukrainians, Zelenskiy said that efforts to get more fighters out of the Azovstal steel plant continue and “the most influential international middlemen are involved,” without providing details.

US to Block Russia From Repaying Bondholders (9:35 p.m.)

The Biden administration is poised to prevent Russia from being able to make payments to US bondholders, a move that could bring Moscow closer to defaulting on its debt.

The Treasury is expected to let a temporary exemption -- which had enabled Russia to stay current on its payments, lapse after it expires next week, according to people familiar with the matter.