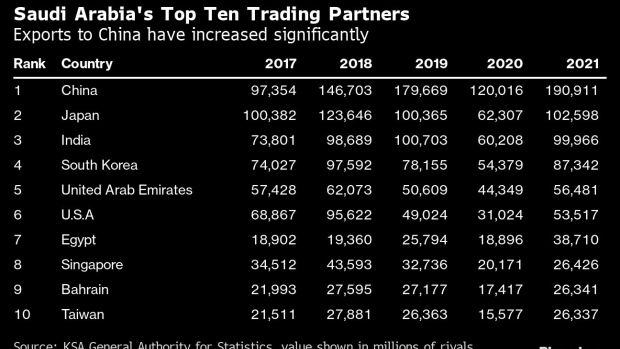 A worker stands at a pipeline, watching a flare stack at the Saudi Aramco oil field complex facilities at Shaybah, in Saudi Arabia. Saudi Aramco, as it’s known, is in talks with international and local banks to replace an undrawn $4 billion loan, the people said, asking not to be identified as negotiations are private. , Daniel Flatley

(Bloomberg) -- The Biden administration has warned it will “recalibrate” its ties with Saudi Arabia after the kingdom supported an OPEC+ decision to cut oil production despite US entreaties.

But the reality is that the relationship has been changing for years.

Over the last few years, the relationship seesawed between Barack Obama’s aloofness to Donald Trump’s warm embrace and back to President Joe Biden’s arm’s-length approach. Here is a closer look into a complex dynamic that straddles trade, energy, arms sales and corporate stakes.

While the energy trade has taken up much of the focus, Saudi Arabia lost its preeminence as an oil exporter to the US years ago, dwarfed by Canada, Mexico and Russia -- at least before the US banned imports following Russian President Vladimir Putin’s invasion of Ukraine.

Another focus is arms sales. Yet the numbers there have dropped sharply over the kingdom’s military intervention in Yemen and the 2018 killing of Washington Post columnist Jamal Khashoggi.

At the same time, US imports of Saudi crude oil have dwarfed proposed weapons sales to the kingdom, reflecting both the commercial and strategic importance of the country. Saudi Arabia is the second largest oil producer in the world, just behind the US. It provides 11% of the total supply of the world’s crude oil and can have an outsize impact on prices through its membership in the OPEC cartel. The US, China and India are the top three consumers of oil, as of 2019, according to the Energy Information Administration.

Saudi Arabia is re-balancing its portfolio. China is now the country’s top trading partner and the kingdom has also escalated its trade with India. At the recent Future Investment Initiative in Riyadh, Saudi Arabia touted domestic and international investments, which have been funded in part by revenue from the sale of oil at higher prices.

The stock market is one area where Saudi Arabia has increased ties with the US., bolstering holdings of equities while reducing the value of disclosed Treasury holdings.

One of the largest backers of Elon Musk’s takeover of Twitter Inc. is Saudi Prince Alwaleed bin Talal, who rolled over nearly 35 million Twitter shares through the Kingdom Holding Company and his private office. That transaction led Senator Chris Murphy, a Connecticut Democrat, to call for a review of Saudi interests in the company by the Committee on Foreign Investment in the US.

Saudi Arabia is emboldened to chart a different course than the previous decades, seeking to diversify its portfolio away from oil, which still makes up about 75% of its exports. That calculation may lead the kingdom away from the US and toward new partners.

“There is a direction of travel which is toward Saudi Arabia -- and some of its peers -- trying to hedge a bit more, be a bit more independent,” said Rachel Ziemba, a senior fellow at the Center for a New American Security. “They may act in ways that are less aligned with the US. Clearly they still see interest in investing in the US. They still see value, for now, in using the US dollar. But they’re also looking to other alternatives.”