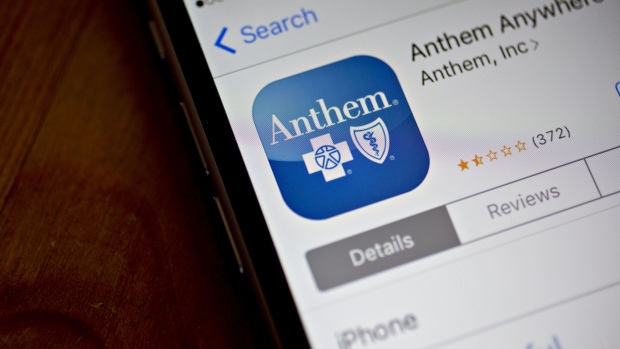 The Anthem Inc. Anthem Anywhere application is seen in the App Store on an Apple Inc. iPhone displayed for a photograph in Washington, D.C. , Bloomberg

Private Medicare health plans are required to spend a certain threshold of their premium revenue on medical claims. The Centers for Medicare and Medicaid Services determined that the plans didn’t hit the required 85% level for three years in a row, prompting the sanctions, according to letters dated Sept. 2 and posted on the CMS website.

The plans cover about 83,000 UnitedHealth members and about 1,200 Anthem members, according to federal data. That represents only tiny fractions of the companies’ overall enrollment in Medicare, the federal health-care program for seniors.

The penalties apply to UnitedHealthcare Medicare plans in Arkansas, New Mexico, and the Midwest, which covers Missouri, Kansas, Nebraska, and Iowa.

A fourth plan operated by the Puerto Rico-based MMM Healthcare LLC, which Anthem recently acquired, was also barred from enrolling new members for 2022.

The penalties for UnitedHealth’s plans were reported earlier by the Star Tribune newspaper in Minnesota on Wednesday. (The insurer is based in Minnetonka, Minnesota.) UnitedHealth’s Medicare membership is about 7.5 million.

UnitedHealth said the Covid-19 pandemic led to some members deferring medical care, leading to it miss the threshold in a handful of markets.

“UnitedHealthcare spends at least 85% of the premiums we take in on care for the people we serve,” company spokesman Eric Hausman said in an email. “In a few markets, we were not able to do that because so many of our members deferred going to get care due to Covid-19.”

Existing members won’t be affected and the company offers other plan options in those markets, Hausman said.

Representatives for Anthem and Triple-S didn’t immediately respond to requests for comment.

Private Medicare plans are an increasingly important part of health insurers’ business. The pandemic has disrupted typical patterns of medical care. As Covid cases increased, patients pulled back on more routine visits, a dynamic that generally more than offset the increased costs of Covid-related care.