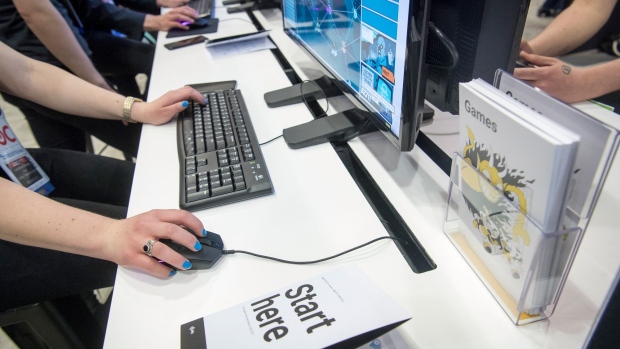 An attendee plays a game at the Unity Technologies booth at the Game Developers Conference in San Francisco, California, U.S., on Wednesday, March 20, 2019. The annual event brings together over 28,000 industry leaders and game developers to exchange ideas and shape the future of the gaming industry. Photographer: David Paul Morris/Bloomberg , Bloomberg

(Bloomberg) -- For more than a decade, game developers have been using a tool called the Unity engine and its easy-to-use tutorials to create more than half of the top 1,000 mobile games available on the Apple Inc. and Google app stores.

That simplicity has turned Unity Technologies Inc. into a household name in the industry. But the 16-year-old company behind the engine has ambitions beyond games. Unity is going public this week seeking to raise $1.2 billion to expand into 3D software that helps companies solve a wide range of real-world challenges -- from training new employees to simulating passenger traffic in a busy airport. The stock market debut also comes as one of its biggest competitors, Fortnite creator Epic Games Inc., is locked in a legal battle with Apple.

Unity plans to offer 25 million shares at an estimated price of $44 to $48 apiece when it lists on the New York Stock Exchange on Friday, according to filings with the U.S. Securities and Exchange Commission. The company raised it’s price range Wednesday from a previous range of $34 to $42 per share. Based on the number of shares outstanding after the offering, the IPO could value Unity at $12.6 billion.

More than 1.5 million people and a handful of big-name gaming companies across some 190 countries use Unity’s flagship product, the Unity engine, each month, according to the company. The software engine is available for free to hobbyists and by subscription for larger game studios. The company also operates a store that sells digital assets like three-dimensional dogs and robots, that can be included in games.

Unity is betting that the next wave of growth, however, will come from selling its 3D technology to film, engineering and car companies. “The thing we’ve been searching for in science fiction and future imaginings of how the world will work, we’re the company building that,” Chief Executive Officer John Riccitiello said in an interview earlier this year. In its securities filing, Unity said it sees a market opportunity of $29 billion across gaming and other industries.

Today, the bulk of Unity’s revenue comes from external services such as a network for advertisements that helps developers put ads directly in their mobile phone games. Most games on iPhone and Android are free and supported either by in-app purchases or ads, with the latter model becoming more popular in recent years. In SEC filings, Unity revealed that it has been operating at a loss since 2018, although revenue has grown 42% to $541.8 million in 2019 from $380.8 million in 2018.

“I don’t think the losses will deter investors in the near-term,” said Matthew Kanterman, an analyst with Bloomberg Intelligence. “The revenue growth trajectory of the company should enable it to scale over its fixed costs and turn profitable in a few years. Over time they can get to a roughly 20% operating margin.”

Unity’s biggest competitor is the Unreal Engine, from Epic, which is seen as a more powerful, prestigious development platform. While Unity is more common among smaller, independent developers, Unreal Engine is used for big video game productions like the role-playing game Final Fantasy VII Remake and the popular shooter Borderlands 3.

But Epic is waging a legal onslaught against Apple and Alphabet Inc.’s Google, accusing them of anticompetitive behavior in their app stores. In August, Apple threatened to block Epic from updating and distributing the Unreal Engine on iOS devices, but a judge ruled that the block couldn’t go through. The war between Epic and Apple seems likely to continue for years, but opportunities for Unity may be limited. “It’s hard to see developers jumping ship from Unreal to Unity while the lawsuit continues, given the differences in the technology and the high switching costs between them,” Kanterman said.

Doug Clinton, managing partner at Loup Ventures, which has invested in Unity, said he’s bullish on Unity’s IPO prospects. Unity could be the next Autodesk Inc. or even Adobe Inc., Clinton said, two software companies whose products are used in engineering, illustration and design and have performed well, particularly in recent years as tech stocks boomed.

“Real-time and interactive 3D content is the future of entertainment and social media,” Clinton said. “Engines that power those experiences are sort of like the next cloud infrastructure — the picks and shovels for developers looking to participate in this new interactive world.”