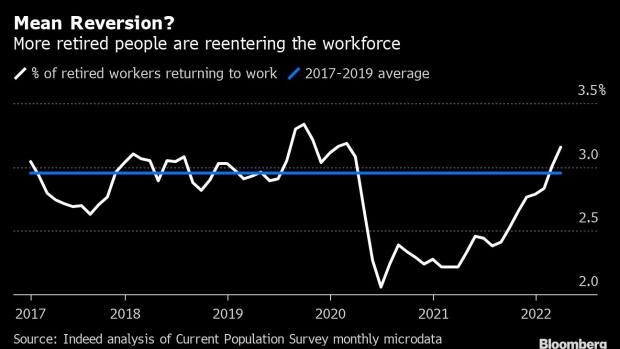 (Bloomberg) -- A mixture of plentiful jobs and high inflation is enticing retired U.S. workers back into the labor market, in a reversal of pandemic trends, according to recruitment firm Indeed Hiring Lab.

In March, some 3.2% of workers who’d been retired a year earlier were back in employment, according to analysis based on Census Bureau data by Nick Bunker, Indeed’s economic research director for North America. That’s in line with pre-pandemic levels, which averaged around 3%, and up from 2.1% in June 2020 during the first phase of the Covid crisis.

A variety of reasons, from financial need to simple boredom, typically persuades some Americans to reverse their decision to retire. The share of such workers declined in the pandemic, when jobs were scarce anyway with businesses shut down. Older employees were also deterred by the fear of getting infected, and some had to help out with childcare too.

Now, the rising cost of living is an incentive for many to return -- and the remote revolution potentially offers another one, enabling some retirees to get back to earning an income without having to resume a daily commute.

The shift may help the economy by expanding the pool of workers available to U.S. businesses that have been struggling to hire enough staff as unemployment falls close to pre-Covid lows.

“Watching this trend in the months ahead will give us a better sense of how much tighter the labor market could get, and how many people can be attracted back to work by higher wages,” Bunker said.