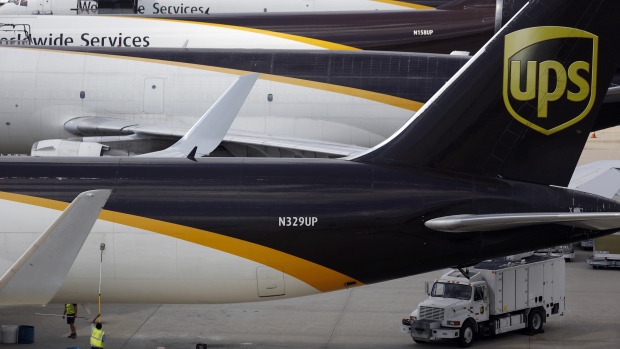 Contractors clean the exterior of a cargo jet on the tarmac at the United Parcel Service Inc. (UPS) Worldport facility in Louisville, Kentucky, U.S., on Friday, Oct. 5, 2018. , Luke Sharrett/Bloomberg

United Parcel Service Inc. climbed the most in more than 20 years as the courier’s results easily topped Wall Street’s expectations on pandemic-induced demand for e-commerce deliveries, health-care equipment and goods from Asia.

Revenue jumped 13 per cent to US$20.5 billion in the second quarter, exceeding the highest analyst prediction. Adjusted earnings were double the average of estimates compiled by Bloomberg, and new Chief Executive Officer Carol Tomé signaled her focus on profitability with a vow to make UPS “better, not bigger” as a shift toward home deliveries threatens to squeeze margins.

The Atlanta-based courier and rival FedEx Corp. have been in overdrive since the novel coronavirus swept the world this year, handling soaring residential deliveries while rushing personal protective equipment to hospitals. Both companies applied peak-season-style surcharges on large customers as demand jumped and new expenses arose that were needed to protect employees and keep sorting hubs free of the virus.

UPS soared 15 per cent to US$142.75 at 1:20 p.m. in New York after advancing almost 18 per cent for the biggest intraday gain since the company’s first day of trading in November 1999. The shares had gained 5.7 per cent this year through Wednesday, while the S&P 500 rose less than 1 per cent.

Adjusted earnings climbed to US$2.13 a share in the second quarter, the company said in a statement, compared with the US$1.07 average of analyst estimates.

UPS’s average U.S. volume climbed 23 per cent to 21.1 million packages a day, driven mostly by a 65 per cent jump in U.S. residential deliveries.

“At the beginning of the second quarter, we assumed demand would slow. Instead, we saw just the opposite,” said Tomé, who took the reins June 1.

“Due to ongoing Covid-related sheltering in place, retail store closures, and changes in U.S. consumer spending fueled by the economic stimulus, we experienced unprecedented demand and record-high volume levels,” she said during a conference call with analysts.

What Bloomberg Intelligence Says
There appear to be no sacred cows at UPS under the new leadership of CEO Carol Tome, in our view, as she looks to increase the efficiency of the global network as well as improve service for customers and returns for shareholders. We believe it will result in a leaner more profitable network longer-term.

Still, the increase in home deliveries weighed on the adjusted domestic profit margin, which fell to 9.3 per cent from 11 per cent a year earlier. That’s because residential service has fewer packages per stop than commercial and requires drivers to travel more between locations.

Business-to-business package volume fell 22 per cent in the quarter, but has been recovering. In July, such deliveries were down about 9 per cent, the company said.

UPS declined to provide guidance on revenue or earnings because of the uncertainty surrounding the timing and pace of economic recovery as businesses begin to reopen.

But Newman warned that revenue growth would slow in the second half. U.S. domestic profit margins will likely be lower than in the first half because of increased worker pay and benefit expenses and one-time gains a year earlier, he said. UPS hired 39,000 workers in the second quarter to deal with the demand surge.

UPS fared well in the highly profitable international segment, with second-quarter sales increasing 5.7 per cent to US$3.71 billion and operating profit jumping 27 per cent to US$842 million. Revenue was driven by strong outbound demand from Asia and an increase in Europe’s cross-border e-commerce, UPS said.

FedEx has also gotten a boost from the pandemic-related demand and saw revenue soar 20 per cent at its U.S. ground delivery unit during the fiscal quarter ending May 31. FedEx rose 1.8 per cent to US$172.65.

Abney will step down as executive chairman Sept. 30. Tomé made clear that changes are coming with a thorough review of how the company does business.

In one example, she said UPS has a legacy of over-engineering in areas such as the 500 different products it offers customers. Those can be pared back and simplified, she said. In the past, UPS would add capacity and then search for volume to fill it, often hurting price. Tomé said she turned down the opportunity to purchase more 747 jets before Boeing halts production of the humpbacked plane in 2022.

Instead, UPS is accelerating a US$750 million investment this year to speed up transit times. It’s also expanding weekend deliveries, which improves customer service, Tomé said, And it may pare spending in other areas.

“We will have a laser focus on creating value for our shareowners with the goal of increasing the rates of return on the capital we invest,” she said. “It’s all about becoming better, not bigger.”

--With assistance from Karen Lin and Maya Neuman.