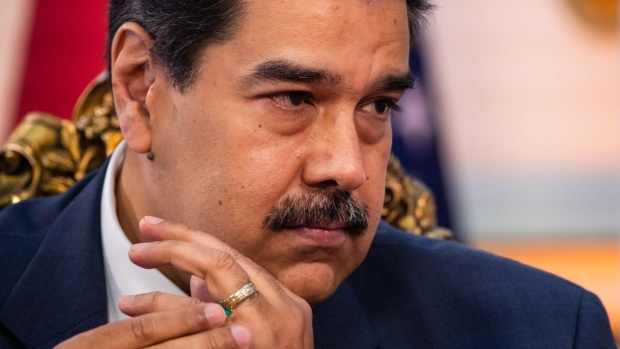 (Bloomberg) -- A top adviser to President Joe Biden dismissed calls for the US to unilaterally lift sanctions against Venezuela, saying that any relief should be accompanied first by the Latin American government taking more democratic steps.

“The unilateral lifting of sanctions on Venezuela is not going to improve the lives of Venezuelans,” US National Security Council Senior Director Juan Gonzalez said on Thursday, speaking remotely at Bloomberg’s New Economy Gateway Latin America hosted in Panama City. “Lifting of sanctions is only going to line the pockets of the regime.”

Gonzalez’s remarks come after Panama President Laurentino Cortizo and UN High Commissioner for Human Rights Michelle Bachelet at the same event this week called for the US to lift its sanctions on the Latin American nation. Their argument is that while the sanctions have punished ordinary citizens suffering from high inflation and food shortages, they haven’t affected the regime of President Nicolas Maduro.

Yet Gonzalez, who earlier this year met with Maduro in a rare visit to Caracas, said that sanction relief should be a consequence of the Venezuelan government allowing for bigger political freedoms in the country.

Maduro backed out of talks with opposition groups last year aimed at resolving the ongoing political and economic crises in Venezuela. Representatives of the two sides this week began “formal talks” to resume political negotiations in Mexico City.

“The sanctions, which were put in place by the previous administration, were certainly focused on regime change,” Gonzalez said. “Our policy framework with regard to Venezuela is simple: If there’s a negotiated outcome that leads to ambitious, irreversible, concrete steps toward free and fair elections,” the US would provide sanctions relief.

Gonzalez is also gearing up for the US to host the Summit of the Americas in early June, the biggest regional gathering of heads of state. As leaders from Mexico, Brazil and Argentina have hinted they may not attend the summit for different reasons, Gonzalez cautioned against rushing to conclusions.

“That’s not necessarily true that they won’t be there,” Gonzalez said. “I’d say wait to see who shows up on June 8.”