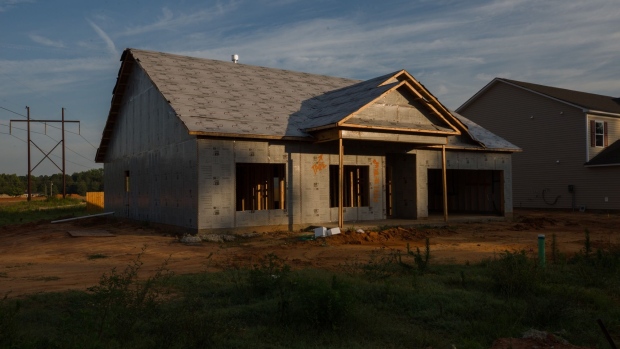 A home under construction in the Woodbridge subdivision in Sumter, South Carolina, U.S., on Tuesday, July 6, 2021. U.S. pending home sales unexpectedly rose in May by the most in nearly a year as low borrowing costs paired with increased listings bolstered demand. , Bloomberg

(Bloomberg) -- US pending home sales fell for a fifth month in October as demand continued to sag under the weight of high mortgage rates.

The National Association of Realtors index of contract signings to purchase previously owned homes decreased 4.6% last month, according to data released Wednesday. The median estimate in a Bloomberg survey of economists called for a 5.3% drop.

The housing market is especially exposed to changes in borrowing costs and the average 30-year fixed mortgage rate hit a two-decade high in October against the backdrop of the Federal Reserve’s most aggressive tightening campaign since the 1980s.

As a result, pending sales are down 36.7% from a year ago on an unadjusted basis. Americans are seeing home buying conditions at their worst levels in at least a generation, which is resulting in fewer transactions across the board.

“October was a difficult month for home buyers as they faced 20-year-high mortgage rates,” Lawrence Yun, NAR’s chief economist, said in a statement. “The upcoming months should see a return of buyers, as mortgage rates appear to have already peaked and have been coming down since mid-November.”

Since topping 7% last month, mortgage rates have since declined abruptly as inflation shows signs of easing and amid investor concerns the economy will falter early next year.

Contract signings fell in three of four regions, led by a 11.3% drop in the West and a 6.4% decrease in the South.

Pending home sales are often looked to as a leading indicator of existing-home purchases as properties typically go under contract a month or two before they’re sold. The index is based on a sample that covers about 40% of multiple listing service data each month.