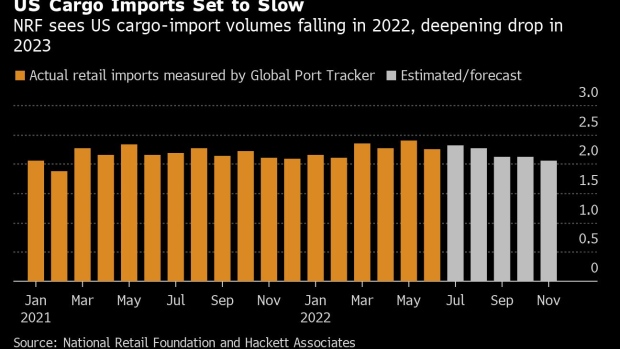 (Bloomberg) -- US ports will see less retail cargo entering the country in the second half of the year as economic growth slows amid back-to-back interest-rate increases and persistent inflation.

Still, 2022 is expected to be the busiest year for imports due to the strong demand in the first half, according to the NRF’s Global Port Tracker, developed with Hackett Associates. The US is projected to handle 26.3 million units of retail imports this year, 2% more than 2021, which was a record.

“Retail sales are still growing, but the economy is slowing down and that is reflected in cargo imports,” said Jon Gold, the NRF’s vice president for supply-chain and customs policy.

Responsible for 42% of all containerized trade with Asia, California’s twin ports of Los Angeles and Long Beach registered an earlier-than-normal peak season this summer, as many retailers began stocking up months before the holidays to avoid another logistics crisis from ruining Christmas.

To avoid the snarls that upended West Coast ports in 2021, as well as ongoing labor negotiations on the docks, some retailers looked for alternative ports on the East and Gulf coasts of the US. As a result, ships are now queuing for days or even weeks waiting to offload their cargo from Georgia to New York.

“Lower volumes may help ease congestion at some ports, but others are still seeing backups and global supply chain challenges are far from over,” said Gold.

The NRF Global Port Tracker provides historical data and forecasts for 13 US ports, including the country’s busiest container ports of Los Angeles, Long Beach and New York and New Jersey.