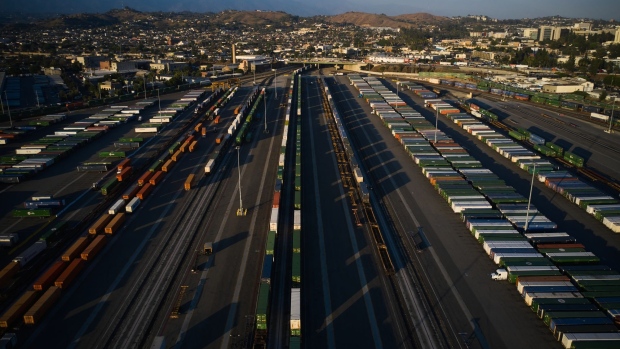 Shipping containers at a Union Pacific rail terminal in Los Angeles, California, US on Wednesday, Sept. 14, 2022. Railroads and unions have until Friday to resolve a labor dispute that risks a crippling shutdown of the nations freight-rail network, wreaking havoc on the US economy. Photographer: Bing Guan/Bloomberg , Bloomberg

(Bloomberg) -- Growth at US service providers remained firm in September, reflecting solid business activity and orders, while a measure of prices fell to the lowest since the start of 2021.

The Institute for Supply Management’s gauge of services softened to 56.7 last month from 56.9 in August, according to data released Wednesday. Readings above 50 signal growth and the figure was slightly firmer than the median projection of 56 in a Bloomberg survey of economists.

While the measure of business activity, which parallels the ISM factory production index, and the new orders gauge both declined from the strongest readings of the year, they remained elevated.

That suggests demand for services is healthy despite high inflation, rising interest rates and growing concerns about the economy’s prospects. Fifteen service industries reported growth in September, led by mining, other services, education and agriculture.

The ISM’s index of services employment advanced to the highest level in six months, suggesting companies are having greater success hiring. The measure rose to 53 in September from 50.2, pointing to an easing of tight labor conditions that have driven up wages and contributed to inflation.

A fifth-straight decline in a measure of prices paid by service providers adds to evidence of moderating cost pressures. The ISM’s index dropped to 68.7 last month, the softest print since January 2021.

The report also indicated supply chains are continuing to normalize. Order backlogs fell to a four-month low and supplier delivery times increased at the slowest speed since February 2020.

“Sales at our restaurants seasonally trend down from August to October, and this year seems to be more severe compared to before the pandemic. General inflation concerns and consumer uncertainty are the likely causes, expressed by industry peers as well.” - Accommodation & Food Services

“General slowdown in sales. We believe high commodity prices and inflation have impacted consumers’ desire for fertilizer from our turf and ornamental division. Farmers have already cut back on consumption due to pricing and weather-related issues.” - Agriculture

“Sales have slowed significantly. Very challenging market... Manufacturers, distributors and installation trades are still busy and passing on price increases, while we are discounting homes to stimulate sales. Margins are compressing.” - Construction

“Labor pressures continue to depress business activity, as insufficient staffing levels are not allowing the hospital system to operate at capacity.” - Health Care

“Due to inflationary concerns, companies are being cautious about hiring direct employees and are attempting to utilize contingent labor.” - Professional, Scientific & Technical Services

“Inventory levels are starting to fall from record highs, but overstocked items are still a problem. We expect lower demand and inventory rebalancing to impact business activity through the end of the calendar year.” - Wholesale Trade

Meantime, service providers appear to be making progress reducing inventory levels. The ISM’s index of stockpiles fell to the lowest since October of last year. A measure of inventory sentiment was little changed and continued to signal more service firms see stockpiles as being too low rather than too high.

The report also indicated a quickening in export growth that defied concerns of a global recession. The export orders index increased to 65.1 in September, the highest since July 2021.