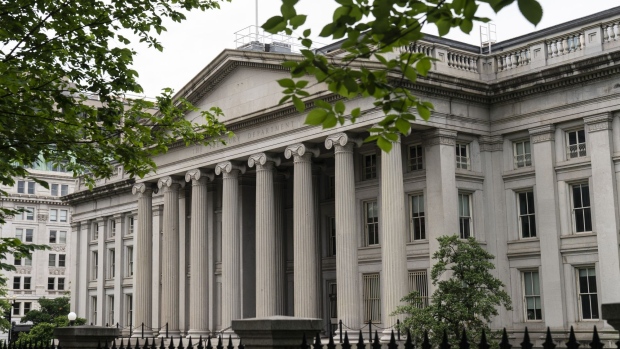 The U.S. Treasury building in Washington, D.C., US, on Sunday, May 22, 2022. The Federal Reserve raised interest rates by 50 basis points earlier this month and the chairman indicated it was on track to make similar-sized moves at its meetings in June and July. , Joshua Roberts/Bloomberg

(Bloomberg) -- The Treasury Department is creating a new office to study the unintended consequences of sanctions -- something its critics argue should have been done years ago.

The department is advertising for a “chief sanctions economist” whose job will be to advise Treasury on everything from monetary policy to exchange rates to “energy, multilateral and bilateral assistance, official debt and related issues,” according to a job description obtained by Bloomberg News ahead of its posting.

“This new, permanent home for sanctions analysis will allow us to be more effective in current and future programs,” Deputy Treasury Secretary Wally Adeyemo said in a statement. He said the office will help uncover “potential collateral effects and spillovers.”

The job comes with a starting salary of $150,000 and requires a Top Secret security clearance. It’s part of the Biden administration’s push to limit the unintended consequences of economic sanctions given their increased use and growing complexity. Sanctions on Russia over the Ukraine war -- the first time the US has imposed such sweeping measures on a Group of 20 economy -- compounded those headaches.

It’s born of the Biden administration’s review of economic sanctions last year. That review found that the US has recorded a 933% increase in sanctions in the decades since the Sept. 11 attacks, and that number only continues to grow as the US piles sanctions on Russia in a bid to roll back President Vladimir Putin’s invasion of Ukraine.

Successive US administrations have turned to sanctions as a policy of first resort as the public appetite for military intervention waned. Sanctions have been used to combat drug traffickers, punish North Korea over its nuclear program, crack down on human rights abuses and deny Putin money he needs to fund the Ukraine war.

As a result, sanctions have grown ever more complex as their targets have grown larger and more sophisticated. Treasury’s Office of Foreign Assets Control now administers at least 37 individual sanctions programs, with some 12,000 individuals and entities designated as sanctioned.

Brian O’Toole, a senior fellow at Atlantic Council who is a former senior adviser at Treasury’s Office of Foreign Assets Control, said it was about time for the new office to help make better strategic decisions.

“It is encouraging to see Treasury beginning to move in that direction,” O’Toole said in a text message. “Russia sanctions aren’t going away, and there is great consternation among the commentariat on how strong sanctions could be used against China if necessary.”

One of the sanctions economist’s job will be to avoid major economic shocks like the one that beset the global aluminum market in 2018 after the US sanctioned companies linked to Russian oligarch Oleg Deripaska, including United Co. Rusal International PJSC. The sanctions on Rusal were lifted a year later.

Critics have said that sanctions programs are overused, difficult to manage and almost impossible to remove once put in place. Licenses are hard to obtain and, as a result, private companies simply stay away from any jurisdiction where there’s a whiff of sanctions risk, even in some cases where US policy demands a form of private sector engagement, such as on humanitarian or other grounds.

Treasury officials say the chief economist’s work will help ease some of those concerns.

Read more: The Evolution of Sanctions as Financial Warfare: QuickTake

The position has no academic requirements beyond a bachelor’s degree. Consideration also will be given to applicants with advanced degrees, though not necessarily in economics. A Top Secret security clearance will be required to deal with sensitive programs under the purview of the Office of Foreign Assets Control, the Treasury agency that oversees sanctions.