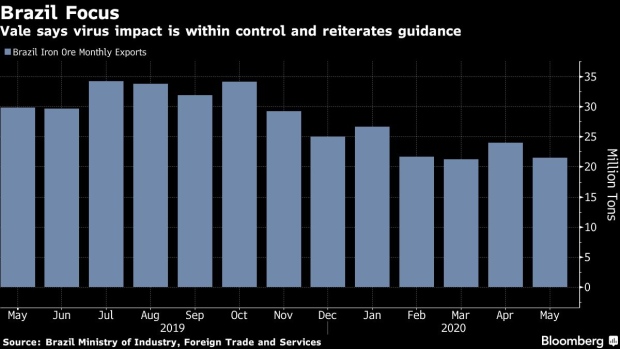 A worker observers construction of containment and recovery dikes as part of the recovery effort, after the Vale SA Corrego do Feijao tailings dam collapse in Brumadinho, Minas Gerais state, Brazil, on Tuesday, Dec. 10, 2019. This week Vale released an external report on the January 2019 Brumadinho dam collapse that faults design, water management and a "high and intense" regional wet season for the disaster. Photographer: Leonardo Carrato/Bloomberg , Bloomberg

(Bloomberg) -- Vale SA was ordered by a Brazilian labor court to close three iron-ore mines at its Itabira complex in Minas Gerais state after an outbreak of Covid-19 among workers.

The decision restores a ban on operations at the Conceicao, Caue and Periquito pits after Vale last week fended off an attempt by prosecutors to close the complex, according to a statement on the prosecutors’ website dated Friday.

Until now, the top iron-ore producer had managed to continue operating through the pandemic, adopting safety measures without stalling output. A prolonged stoppage at a complex that accounts for a tenth of Vale’s production could help prices of the steelmaking ingredient extend a rally that has been fueled by robust Chinese demand.

The injunction was granted to close the mines until a final court ruling after 188 workers tested positive. Rio de Janeiro-based Vale said in an emailed response that “it has been notified and is already working on the necessary actions to better comply with the decision.”

Vale said that regardless of any new initiatives, it has already adopted preventative and containment measures, such as reducing its workforce, screening and social distancing in buses and restaurants.

The court order comes as Covid-19 explodes in Latin America, with the region’s highly urbanized population of 600 million becoming the new global epicenter. In April, Vale cut its shipment guidance due to bad weather and the virus’s impact on operations.

Still, iron ore futures capped their first weekly decline in more than a month as Vale said it’s preparing to restart some operations and as analysts predict seaborne supply will pick up in the second half. Vale has made preparations to resume operations at its Southern and Southeastern systems, according to a China Metallurgical News interview with executive director for ferrous minerals Marcello Spinelli. The miner’s fatal dam disaster site last year, which crimped shipments, is part of the Southeastern systems.