The housing numbers out of Vancouver, once among the world’s hottest real estate markets, are getting more dismal with each passing month.

Sales in April were the lowest in 24 years for a month that typically kicks off the busy spring homebuying season. Benchmark prices are down 8.7 per cent from their peak in mid-2018 and the number of homes sitting on the market has ballooned by nearly half, according to the Real Estate Board of Greater Vancouver.

Yet those awaiting a final reckoning -- and the chance to buy a home on the cheap in this picturesque West Coast city -- may be disappointed, according to Tamara Vrooman, chief executive officer of Vancouver City Savings Credit Union.

“We see no evidence of a freefall,” Vrooman, 50, said in an interview at the headquarters of Canada’s largest credit union. “We have certainly seen a lot of sitting on the sidelines and wait-and-see, but we’re also seeing signs that we might be at the trough."

Outlying suburbs and southern Vancouver Island, favored by families and those able to work remotely or start businesses, are still seeing growth, she said. Developers are also starting to assemble lots and buy land again. One Vancity client recently tried to buy a commercial building in Vancouver listed for $20 million, but lost -- the property sold for $26 million within five days after getting seven offers, she said. 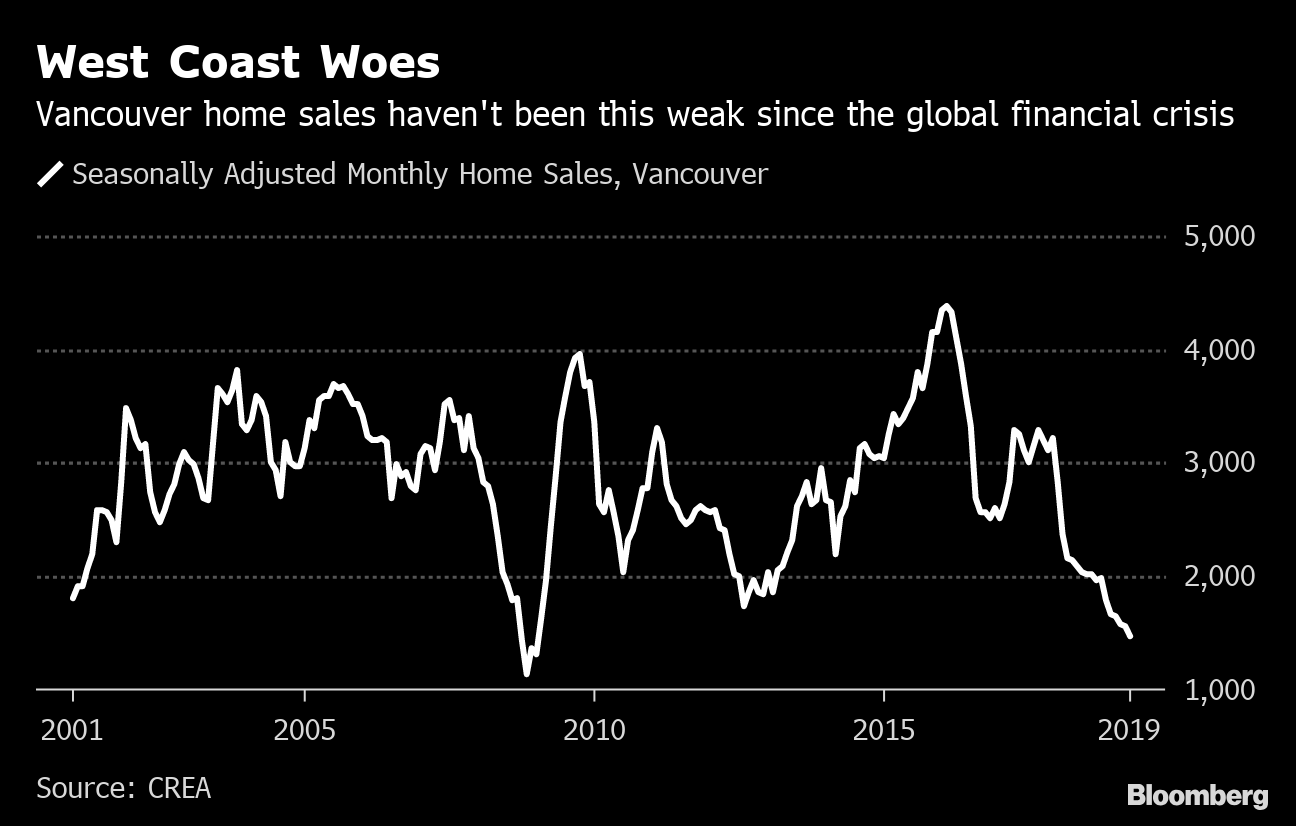 Vrooman has a better insight than many: Vancity provides banking services for about a quarter of the people in the metropolitan area of 2.25 million. She’s well aware of the economic challenges facing borrowers and potential homebuyers in a city where the benchmark home price is still more than C$1 million. According to real estate website Zoocasa, only the top 2.5 per cent of income earners can afford to buy a house in Vancouver.

Housing for families, such as two- and three-bedroom townhouses with a small yard, aren’t part of Vancouver’s housing supply, she said. Cheap rentals are also difficult to come by, even with Vancity financing the development of 3,000 affordable rental units in the past year.

“We still see affordability as the primary issue," she said.

With Canada’s rising household debt levels “perilously high,” more needs to be done to lift incomes that have stagnated for years within British Columbia’s real estate fueled economy, according to Vrooman.

“Real estate has been our oil, in many ways," she said. “It’s been the dominant factor in our regional economy."

That has caused a "brain drain" of talent within the region into the property market, depleting other industries that could offer high-paying jobs and counter any downturn from real estate.

Nevertheless, Vancity has benefited from the real estate boom. During Vrooman’s 11 years at the helm, the co-operative has boosted assets 62 per cent while advancing its long-standing objective of upending the big banks in Canada’s third-largest city. The lender has 59 branches and 2,853 employees mostly in and around the Vancouver region.

It had $22.9 billion in assets at the end of 2018, when it posted $116.5 million of annual profit before taxes and distributions to the 534,000 members who own a stake in the co-operative. The credit union has added more than 25,000 members each year in the past five years, with about half aged 35 or under.

“We’re competing with them for the hearts and minds every day," Vrooman said of her competitors. “When we gain market share, though, we gain it from the banks, and two in particular -- TD and RBC, because they’re the biggest ones."

Like Canada’s big banks, she’s also seen a slowdown in mortgage lending amid more stringent rules and other measures in the last few years to slow B.C.’s overheated housing market.

Vancity has been countering the slowdown by focusing on mortgage renewals, capturing a 92 per cent retention rate for its home loans. The credit union is currently seeing 3 per cent to 4 per cent year-over-year growth in new mortgages, less than half the growth of three years ago.

"We see it returning to what we call more normal market conditions," Vrooman said. “We see a slow but steady return to normal.”