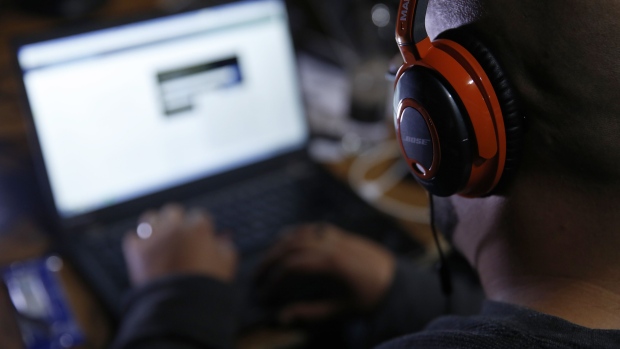 An attendee wearing Bose Corp. headphones works on a laptop computer as he participates in the TechCrunch Disrupt London 2015 Hackathon in London, U.K., on Saturday, Dec. 5, 2015. Disrupt is an annual conference hosted by TechCrunch where some technology startups launch their products and services competing on stage in front of venture capital potential investors, media and other interested parties. , Photographer: Bloomberg/Bloomberg

That’s the finding of a study by DocSend, a Dropbox Inc. subsidiary that allows companies to securely store and share pitch documents. Venture capital firms spent 18% more time viewing pitch decks from all-male teams than those made up of only women, DocSend found. That eventually resulted in men’s firms raising 70% more than women did in 2020 -- an even greater disparity from 2019, when women raised about half as much as men.

Decks from startups that have longer viewing times are ultimately more successful in raising money, DocSend said. “This is not a fluke, and we want to shine a spotlight on it,” said Russ Heddleston, co-founder of DocSend. “That is a shocking difference.”

Gender and racial funding disparities for startups are well documented. Teams led by all-White men routinely raise more money than those with women and minorities at the helm. This partly has to do with who controls venture capital, and the prejudices they bring with them when making funding decisions. Only 16% of investment partners at venture capital firms are women and 78% are White, according to a 2020 survey by Deloitte and the National Venture Capital Association, a trade group.

DocSend’s findings suggest bias is manifesting in unconscious ways. The pitch deck is often what determines if a startup even gets a meeting with potential investors, in a scan that typically lasts about three to five minutes, DocSend said. The study analyzed the clicks of all investors involved in 200 company pitches last year. Founders were asked to self-identify whether their team included non-White members.

Investors spent more time scrutinizing the fundraising slides and slides that gave product information for White male firms than for all-female companies, which is likely to increase the odds of getting an investment, Heddleston said. For women, they spent more time on the business model and market tractions slides, which showed more uncertainty about the pitch, he said.

While the gender gap remained, teams with minority members actually improved on several metrics in 2020, raising $594,000 on average compared to $418,000 at less diverse firms. And at the pre-seed stage, investors spent about 90 more seconds viewing decks from teams with a minority member than those of all-White teams.

DocSend’s Heddleston said that was likely a result of the Black Lives Matter protests, which have pushed companies and investors to send more resources to underrepresented groups. Still, teams with minority members are less likely to get funding than those with all-White founders.