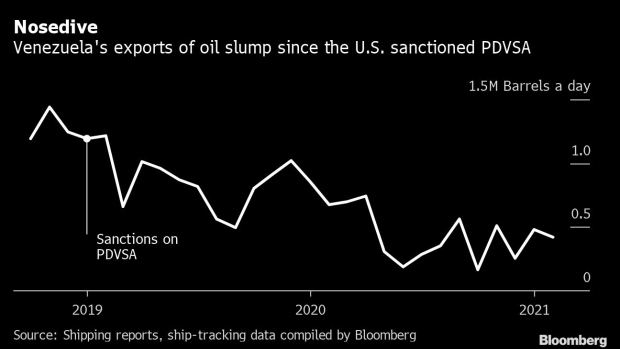 (Bloomberg) -- Venezuela oil exports dropped in February after the U.S. sanctioned key trading houses and individuals that had been propping up exports of the commodity that bankrolls President Nicolas Maduro’s regime.

Crude shipments fell to 418,857 barrels a day in February, a 13% drop from January, according to shipping reports and ship-tracking data compiled by Bloomberg. In mid-January the U.S. blacklisted Maltese trading company Elemento Limited and Geneva-based Swissoil Trading SA for facilitating Maduro’s attempts to circumvent U.S. sanctions.

Elemento Ltd. and Swissoil had been helping the country to keep selling oil embargoed by America. In a violation of sanctions, Elemento bought oil from Petroleos de Venezuela SA and resold it in the market. Swissoil Trading SA helped PDVSA to disguise the crude origin by “doping” it with chemical additives and selling it as something other than Venezuelan oil, according to documents obtained by Bloomberg. Alessandro Bazzoni, with Elemento, and Philipp Apikian, with Swissoil, were also blacklisted.

OPEC-founding member Venezuela, which sits atop more oil than Saudi Arabia, has resorted to a myriad of little-known companies including Hangzhou Energy and Ariastone Group Pty Ltd to help sell its oil since the U.S. sanctioned it two years ago. After China National Petroleum Corp and Rosneft Oil Co PJSC stopped doing business with Caracas, Maduro strengthened ties with Iran, another country isolated by U.S. sanctions.

The South American nation has been also relying on vessels that turn off their transponders when approaching oil ports, a practice known to be used to avoid detection, and forged bills of ladings and fake loading lists to avoid sanctions. The majority of Venezuela’s crude exports have been going to China, with occasional cargoes going to Cuba.