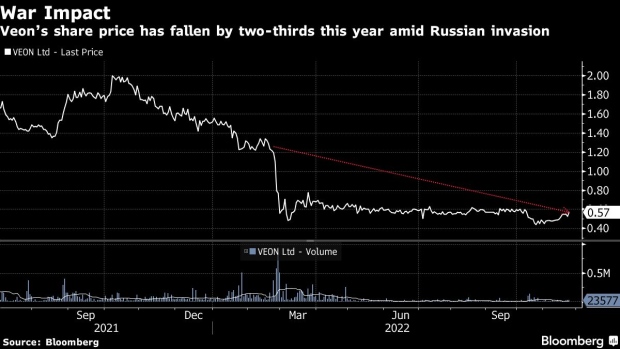 (Bloomberg) -- Veon Ltd. decided to sell its Russian unit to some senior members of its management team in the country as the mobile operator attempts to limit the fallout from the war in Ukraine on its business.

Veon will receive 130 billion rubles ($2.1 billion) from PJSC VimpelCom’s managers, the company said in a filing on Thursday. The total sum will be paid primarily by taking on Veon’s debt, although no specific amount was disclosed. The deal is expected to be completed by June 2023.

Veon’s shares rose 8.6% in Amsterdam after the announcement, after having fallen by two-thirds this year as the invasion and subsequent sanctions on Russia imposed by the US, EU and UK undermined the company. Its Russian unit accounts for about half of the mobile operator’s revenue.

“Following the conclusion of this transaction, Veon will have greater visibility for regaining access to international debt capital markets,” Chief Executive Officer Kaan Terzioglu told Bloomberg by phone after the announcement.

“It is important to look at this deal in the context of other significant transactions,” he said, pointing to a sale of Russian tower assets for over 70 billion rubles in December 2021 and the transfer of 90 billion rubles of Veon debt to VimpelCom in April. “Combined, these three deals reduce our debt outside of Russia by around $4.8 billion.”

Veon has to pay over $1.2 billion in bonds that mature in February and April. Total cash and cash equivalents were $3.3 billion in the third quarter, with $2.6 billion held at headquarter level.

To allow time for the deal to go through before the debt becomes due, the company has launched a scheme of arrangement in England to extend the maturities of the bonds by eight months from their respective deadlines, according to a separate statement by the company on Thursday.

Veon’s stated agreement to sell its Russian unit (50% of sales) to local management for 130 billion rubles ($2.1 billion) -- paid largely by the latter taking on holding-level debt -- may not appear financially attractive, but looks like the only way to revive sentiment. The move could also shine a light on the brighter prospects and implicit valuation of Veon’s non-Russian business. The deal puts the latter at 4.5x trailing Ebitda vs. 4-8x for most emerging-markets peers.

Veon was founded in Moscow in 1992 as VimpelCom, one of the nation’s first cellular-phone providers. It has grown into a Dutch-domiciled telecommunications giant with more than 217 million customers in nine countries and is the largest mobile operator in Ukraine.

LetterOne Investment Holdings, founded by Russian billionaire Mikhail Fridman, owns 48% of Veon according to data compiled by Bloomberg. Fridman was sanctioned by both the EU and the UK earlier this year, and stepped down from the boards of Veon and LetterOne.

--With assistance from Irene García Pérez and Giulia Morpurgo.

(Updates with shares, quotes and details.)