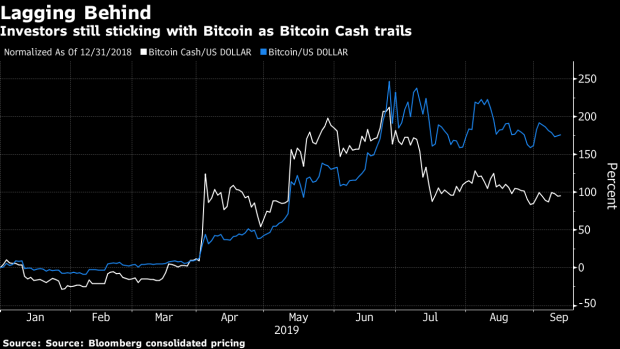 USB cables are seen inside the DMM Mining Farm, operated by DMM.com Co., in Kanazawa, Japan, on Tuesday, March 20, 2018. Japan is moving toward legalizing initial coin offerings, even as countries such as China and the U.S. restrict the fundraising technique because of their risks for investors. A government-backed study group laid out basic guidelines for further adoption of ICOs, according to a report published on April 5. Photographer: Tomohiro Ohsumi/Bloomberg , Bloomberg

(Bloomberg) -- Bitcoin.com, the firm backed by crypto evangelist Roger Ver, is working on multiple ideas to ramp up interest in Bitcoin spinoff Bitcoin Cash, including a futures contract.

The goal is for Bitcoin Cash to become one of the largest cryptocurrencies in the world behind Bitcoin, according to the new head of its recently launched exchange unit, David Shin, who was most recently Asia head of global equity derivative sales at TD Securities.

To generate that volume, Shin said he has begun discussions to list a Bitcoin Cash futures product on a Commodity Futures Trading Commission-regulated exchange, and “would love to speak with CME about listing a BCH future.” CME Group Inc. currently markets Bitcoin futures contracts.

Shin is also looking to work with a retail broker so U.S. investors can trade the regulated product.

“We’ll try to list a BCH future on one of these exchanges that’s CFTC regulated to therefore have a product that can be traded into the U.S. with institutional traders,” he said. “In theory we should see more penetration, more users, more trading and more volume.”

On the retail side, Shin wants to develop an eSports-like trading tournament whose ultimate goal is to create crypto influencers -- people retail investors will gravitate to in an industry that remains strongly personality-driven.

Shin joined Bitcoin.com at the end of August to run its exchange business, which debuted Sept. 2. Ver, one of the most prominent supporters of Bitcoin Cash and known in the industry as “Bitcoin Jesus,” became executive chairman in August when he appointed Stefan Rust as the new CEO of Bitcoin.com.

Shin will have his work cut out for him.

While Bitcoin Cash has doubled in market value this year to about $5.4 billion, it’s well behind the top three cryptos Bitcoin, Ether and XRP. The largest digital currency is worth about $183.1 billion, according to data from Coinmarketcap.com.

Bitcoin Cash is the result of clashes among various factions disagreeing on the future development of the base Bitcoin blockchain. Given mainstream investors’ skepticism for even the original flavor of Bitcoin, it’s an even more difficult proposition drumming up interest in alt-coins further down the food chain.

“I don’t think the institutions really know what BCH is, so I want to be out there to change that rhetoric,” Shin said. “There’s a real opportunity if we believe two contracts are not enough, and maybe three to five is the right number, that the third one should be Bitcoin Cash.”

To contact the editors responsible for this story: Christopher Anstey at canstey@bloomberg.net, Joanna Ossinger, Andreea Papuc