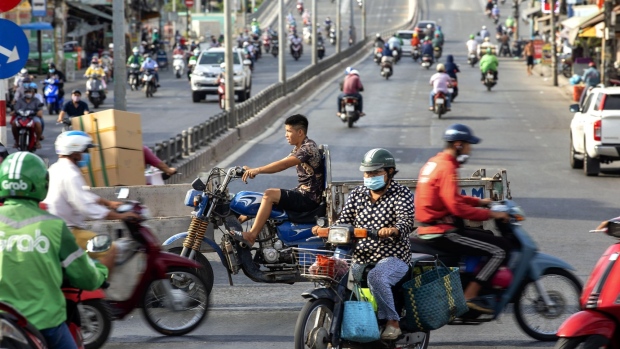 Traffic travels along a road during a nationwide social distancing and stay-at-home order imposed due to coronavirus in Ho Chi Minh City, Vietnam, on Wednesday, April 22, 2020. Vietnam's social distancing order is easing on April 23 for most of the country just ahead of next week's four-day holiday. Prime Minister Nguyen Xuan Phuc told authorities in cities and provinces to decide which businesses can reopen, according to a statement on the government’s website. Photographer: Maika Elan/Bloomberg , Bloomberg

The most important goal for the nation is to maintain economic stability and a low inflation rate to help businesses, investors and the people, Phuc told a small group of foreign media in Hanoi. The government will watch the movement of domestic and international markets to have suitable monetary policies to ensure reasonable growth, he said.

While growth is likely to be lower than a previously targeted 6.8%, and down from 7% in 2019, the economy is still expected to expand this year, unlike most of Vietnam’s neighbors facing recessions. Phuc, in an interview Thursday evening, initially said growth for the year would be 5%. He gave the 4-5% growth range in a written answer to questions distributed after the interview.

Disruptions to global supply chains caused by the pandemic will weigh on Vietnam’s exports -- amounting to more than 100% of its gross domestic product -- but the Southeast Asian nation stands to benefit from companies looking to diversify their manufacturing base away from China.

Vietnam “is getting ready to receive foreign investors who want to either invest in new projects or move their production from other countries to Vietnam,” Phuc said.

The Communist government, which has reported just 324 infections and no deaths, is credited by the World Health Organization and others for its early and aggressive response to the virus that has slammed the brakes on the global economy. It has not had any community-spread infections in 35 days, according to the health ministry.

Vietnam’s strong economic fundamentals should enable the country to rebound in 2021 if the pandemic is relatively under control in the nation and globally, according to the World Bank.

“We will continue to be a safe place for international investors and tourists,” Phuc said. “We consider investors’ success as our success.”

The country was already well positioned to capture more of the global supply chain as companies accelerate shifts away from China due to rising costs and the trade war. Global giants such as Samsung Electronics Co., LG Electronics Inc. and Intel Corp. have already set up large operations in the country.

Japan, Vietnam’s second-largest investor in the first quarter with $848 million, announced last month it was earmarking $2.2 billion of its economic stimulus package to encourage manufacturers to shift production out of China.

Taiwanese company Inventec Corp., Apple Inc.’s assembly partner for AirPods, is preparing to establish a unit in Vietnam. Apple supplier Pegatron Corp.’s board in February approved a $150 million plan to set up a Vietnam unit.

Phuc said the economy has an enabling monetary policy environment to help businesses, and added that the government is also developing important infrastructure projects to help improve logistics.

The State Bank of Vietnam, which has cut key rates twice already this year to help struggling businesses, will continue to monitor the global and domestic economies to ensure “reasonable growth” and maintain macroeconomic stability, the premier said in written comments to questions. “Vietnam has put in a lot of effort to control and repel the Covid-19 epidemic early” and is now poised “to rise up with its economic recovery and development.”

From the earliest days of the pandemic, the government moved to contain the virus’ spread with aggressive contact-tracing, mass quarantines of communities and people entering the country and public information campaigns, from ubiquitous posters to text messages delivered multiple times a day on phones. The government lifted a partial economic lockdown last month.

“We have issued many guidelines, with drastic measures, focusing on the response and prevention to limit the spread of the virus with more measures that were earlier and stronger than the recommendations of the World Health Organization,” Phuc said. The government “fought against the epidemic like fighting against the enemy,” he said.

Leaders are now looking to bolster an economy bruised by this battle.

The government is enacting policies such as restructuring bank loans, freezing debt, reducing or exempting loan interest payments and implementing assistance packages, including 62 trillion dong ($2.7 billion) in aid for 20 million workers, he said. It is also looking to quickly disburse government investments and put in place administrative reforms to help quicken a recovery, Phuc said.

The country is impatient to move on as motorbikes and automobiles once again clog city streets, restaurants are filling up and most businesses have reopened. Indeed, during Phuc’s meeting with journalists at the Government Office, social distancing was not enforced and few masks were worn as the prime minister shook hands with all his visitors and posed for photos.“Vietnamese people always believe that, ‘In danger, there is always an opportunity,’ the prime minister said.

(Updates with more details throughout story)