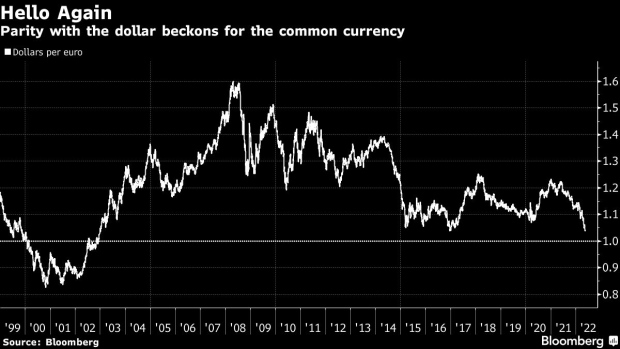 (Bloomberg) -- Bank of France Governor Francois Villeroy de Galhau signaled that the weakness of the euro is focusing the minds of European Central Bank policy makers at a time the currency is heading toward parity with the dollar.

The Governing Council member, speaking in Paris, renewed his warning first voiced on May 6 that officials need to keep an eye on the foreign-exchange market, cognizant of the impact that it might have on consumer prices.

“Let me stress this: we will carefully monitor developments in the effective exchange rate, as a significant driver of imported inflation,” Villeroy said. “A euro that is too weak would go against our price stability objective.”

The recent drop in the currency adds to the list of inflation-stoking variables that the ECB is becoming increasingly concerned about. Trading at $1.0423 at 9:35 a.m. in Paris on Monday, the euro is currently near the lowest since 2017. It was last below parity with the dollar 20 years ago.

Villeroy also spoke on the timing of the first interest-rate increase since 2011 after a flurry of comments pointing toward the likelihood of a cessation of bond purchases in June and a hike in July.

“I won’t add my precise calendar prediction to the many existing ones, but expect a decisive June meeting, and an active summer,” he said. “The pace of the further steps will take into account actual activity and inflation data with some optionality and gradualism, but we should at least move toward the neutral rate.”

The governor observed that a consensus “is now clearly emerging” on the Governing Council on monetary policy, and cited ECB President Christine Lagarde’s speech last week that described inflation as “not only higher but broader.”