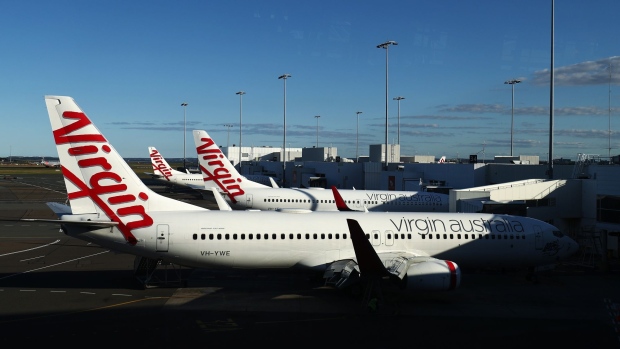 Aircraft operated by Virgin Australia Holdings Ltd. stand at gates at Sydney Airport in Sydney, Australia, on Friday, June 26, 2020. Bain Capital LP agreed to buy collapsed airline Virgin Australia in one of the biggest single bets on the industry since it was shattered by the coronavirus pandemic. Photographer: Brendon Thorne/Bloomberg , Bloomberg

(Bloomberg) -- Virgin Australia Holdings Ltd. will cut a third of its workforce under the ownership of Bain Capital as the buyout firm attempts to resurrect the airline during the industry’s worst-ever crisis.

Under a plan announced Wednesday, 3,000 of the airline’s 9,000 jobs will be shed, international travel will remain suspended until the global market recovers and the budget Tiger Australia brand will be discontinued. The airline will fly only Boeing Co. 737s on domestic and short-haul routes, dropping other aircraft including Boeing 777s and Airbus A320s.

The proposals are the first glimpse of Bain Capital’s plans to revive Virgin Australia in a market that shows little sign of recovery. The airline crumbled in April under A$6.8 billion ($4.9 billion) in borrowings and travel bans triggered by the coronavirus pandemic. Administrators fast-tracked an auction before Virgin Australia’s cash ran dry and agreed to sell the airline to Bain in June.