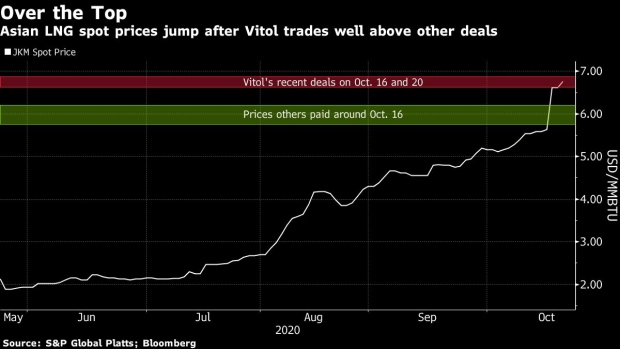 (Bloomberg) -- One of the world’s top energy merchants is the talk of the Asian liquefied natural gas trader community after a series of above-market deals that may have contributed to a price surge.

Three trades inked by Vitol Group on Friday and Tuesday were done at prices well above recent assessments via a process overseen by S&P Global Platts, which sets the influential Japan-Korea Marker, the benchmark for the fuel in Asia. JKM has rallied about 20% in the three sessions through Tuesday to $6.761 per million British thermal units, the highest level in a year.

While winter demand optimism across North Asia and supply disruptions have boosted sentiment, 10 traders at other firms said they were surprised by the prices paid by Vitol, which were higher than other recent physical deals. The traders asked not to be identified because they aren’t authorized to speak with the press.

Deals in the spotlight:

The commodity house’s three trades were the only physical transactions executed over the three-session period via Platts’ Market on Close. Traders often participate in the MOC process to represent their current view of the market, and where they see bids and offers.

“If we observe activity or receive anomalous data that could potentially distort the price assessment process, we review the matter and take appropriate steps, including excluding such data,” Dave Ernsberger, global head of pricing and market insight at Platts, said without commenting specifically on the Vitol deals.

To be sure, JKM’s spot price assessment changed from November to December delivery shipments on Friday, which helped lift the price as it locked in the higher rate for the winter month, according to Chris Durman, global head of LNG Analytics at Platts. Still, December prices jumped by an average of 75 cents per million Btu on Friday after the two Vitol trades, according to Platts data.