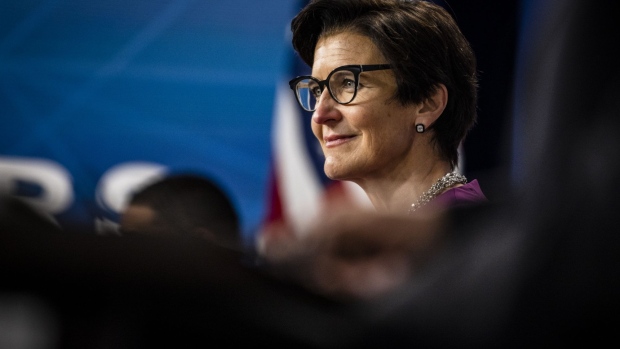 (Bloomberg) -- The dealmaking and trading windfall that the pandemic unleashed on Wall Street firms just keeps piling up as the economy recovers -- and U.S. banking leaders are pointing to signs that it’s far from over.

A fresh round of earnings reports by five of the nation’s largest lenders included revenue hauls from investment banking at Morgan Stanley and Bank of America Corp. that were at or near record levels, and dramatic surges in equities trading across the industry, such as a surprising 40% jump at Citigroup Inc. Closely watched Goldman Sachs Group Inc. reports its third-quarter results Friday.

The latest phase of the 18-month frenzy was driven by companies eager to do deals as they adjust their businesses, and by traders betting on the pace of an economic recovery amid supply-chain woes and inflation worries. The outlook, according to several financial industry leaders, is more of that, along with mounting pressure on the Federal Reserve to reduce its emergency pandemic support for the economy.

The bonanza from Wall Street operations is a source of relief for banks struggling to earn more from traditional lending operations, which have suffered from lukewarm demand and a prolonged period of low interest rates. JPMorgan Chase & Co., the largest U.S. bank, said consumer loans were down 2% from a year earlier, while commercial loans fell 5%. At Wells Fargo & Co. the drops were 15% and 7%, respectively.

The surge in dealmaking and other revenue gains will probably translate into higher compensation costs at JPMorgan in the coming year, as the firm rewards employees’ performance, the bank told analysts on Wednesday. Rivals including Citigroup mentioned efforts to beef up their desks with hiring. Bank of America said the fight for talent will add to its compensation costs, too.

Wall Street’s top firms began capitalizing on a golden era for dealmaking and trading after the pandemic erupted last year. As the economy slumped, corporations rushed to raise money, fueling underwriting and bond trading amid share-price swings. While fixed-income trading has since cooled, customer interest in stock markets has propped up revenue on equities desks and supported a record spree of corporate dealmaking.

Bank of America’s investment bankers ended the third quarter with a “very strong” pipeline of deals that “bodes well for the fourth quarter and beyond,” finance chief Paul Donofrio told reporters on a call Thursday.

That echoed sentiment from his counterpart at JPMorgan, Jeremy Barnum, a day earlier.

“Looking ahead to the fourth quarter, the overall pipeline is healthy and the M&A market is expected to remain active,” Barnum told analysts. He predicted that during the final months of the year fees from investment banking will be up from the end of 2020, even if they drop from the strong third quarter.

Citigroup has added 200 bankers across its corporate and investment banking arms globally, including in its technology, health care and financial technology practices, CEO Jane Fraser said Thursday on a conference call.

“Certainly the recovery from the pandemic continues to drive corporate and consumer confidence,” she said. “I particularly like the robust pipelines we see through the rest of the year and beyond.”