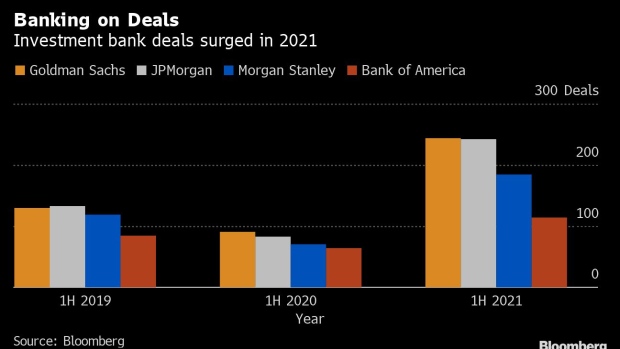 (Bloomberg) -- It’s trading places all over again on Wall Street -- this time, on a multi-billion dollar scale.

Trading desks that last year raked in their biggest haul in almost a decade are expected to report a sharp drop in second-quarter revenue this week as life returns to normal and pandemic-induced market volatility fades. Meanwhile, on the ascent: investment bankers who are scrambling to keep up with a record deluge of deals, fueled by rebounding corporate confidence and free-spending private equity firms.

Never before has Goldman Sachs Group Inc., the leader on league tables tracking mergers and acquisitions, passed the $1 trillion mark for transactions so early in the year. JPMorgan Chase & Co. and Morgan Stanley, the No. 2 and 3 banks by market share respectively, have also seen large jumps in business.

All three lenders have worked on at least 100 deals more in the first half of the year, compared with the same period through 2019 before the pandemic began, according to data compiled by Bloomberg.“We’ve done 200-plus $500 million deals in the first half, and the five-year average is in the 80 to 100 range,” Stephan Feldgoise, Goldman Sachs global co-head of mergers and acquisitions, said in an interview, citing data using all publicly available sources.

Now, the question is whether the tidal wave of takeovers, stock offerings and debt deals can make up for what’s expected to be a 28% drop in combined trading revenue at the five biggest U.S. banks -- a group that also includes Bank of America Corp. and Citigroup Inc., where low interest rates are pressuring lending margins. The answer is that results will vary. Even for Goldman, where advisory has the largest percentage of revenue, the fees still account for less than 10% of the business. For JPMorgan, that proportion is far less.“The impact of strong M&A generally is not enough to offset weaknesses in other businesses,” Ralph Schlosstein, the co-chief executive officer of Evercore Inc., said in an interview. His firm’s business is more heavily weighted toward M&A. “For the bigger firms, it’s an important source of prestige, but not the driver of overall performance.”Yet the investment banking divisions can be more profitable given they require only one main input: the dealmakers that win multi-billion dollar mandates. “It’s a very high ROE business -- return on equity -- because M&A uses no capital,” Schlosstein said. “Second of all, it does drive activity in other business.”

Bank of America’s Thomas Sheehan, the head of global investment banking, said there’s an “M&A force multiplier.” Advising on mergers can often lead to winning mandates on stock or debt offerings to finance those deals, he said. Goldman’s Feldgoise echoed the view.

“So many things flow out of the M&A business,” Feldgoise said. “The hedging businesses, the derivatives businesses, the financing business.”It’s not just M&A. Initial public offerings have had their best half year on record, and the third quarter is shaping up to remain busy. And while private equity firms are sitting on billions worth of funds, they’re fueling leveraged finance businesses at the large banks as they seek debt to buy companies.Dealmakers are guiding for a strong end to the year. “The fee pool is up materially year-over- year, and we’re pretty upbeat that we’re going to continue to see strong performance,” said Sheehan, whose bank is currently the No. 4 on the rankings, according to data compiled by Bloomberg. He said there are still risks, including the resurgence of Covid-19, inflation pressures and government regulation. “There will be periods of volatility,” he said.The three banks with the largest share of M&A volumes have also taken more aggressive approaches at getting staff back to the office as the economy emerges from the pandemic. Goldman asked its U.S. bankers to come back in June, JPMorgan asked U.S. employees to come back by July, while Morgan Stanley said its workers should be back by Labor Day.