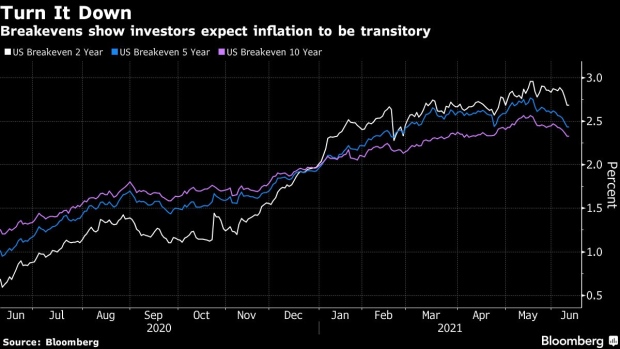 (Bloomberg) -- After weeks of drift and doubt, Wall Street was looking for a decisive signal on price growth to help put the reflation trade back on track. Instead it got another mixed message.

Prices paid by U.S. consumers rose in May at the fastest pace since 2008, yet the details of data released Thursday supported the Federal Reserve’s view that the jump will prove transitory.

As investors digested the numbers, an initial increase in Treasury yields lasted little more than an hour, and by lunch they were extending recent declines. Tech stocks led the equity advance, with the Nasdaq 100 outperforming as more economically sensitive sectors lagged.

“In the end, a print like this is not enough to get the Fed to flinch, which is -- big picture -- what matters,” said Ross Mayfield, investment strategy analyst at Robert W. Baird & Co. “If the economy is strong and people are out buying and retail sales are high and prices are jumping because there’s demand, that’s good for stocks.”

The data offered little cause for conviction on either side of the inflation debate, but it was the reflationistas who most needed a boost.

Read more: Great Inflation Trade of 2021 Takes a Back Seat on Wall Street

Now wagers on brewing price pressures look set to remain on the back-foot. In the lead-up to the data, market-derived expectations of price growth were trending down, with gauges of two-, five- and 10-year breakevens all heading lower after peaking in mid-May.

“Markets are pricing in a Goldilocks scenario: low inflation and higher growth at trend,” said Pascal Blanque, chief investment officer at Amundi Asset Management, who recommends short duration and long value-stock trades. “But we will likely end up with higher structural inflation and lower growth instead.”

There are still plenty of reflation bets out there. Investors continue to add cash to inflation-protected bond ETFs, with the $29 billion iShares TIPS ETF (TIP) luring money six weeks in a row even as its price fluctuated.

Dennis DeBusschere and his team at Evercore ISI see the recent moderation of market-derived inflation expectations as a tail wind to economic growth. As short bond positioning is cleared out, labor markets improve and China pushes back on commodity prices, the odds of a “significant move higher” in yields will rise again, according to the strategists.

“With the long term demand outlook still firm, a slight decline in inflation expectations gives the Fed room to keep policy easier for longer,” they wrote in a note this week.

The inflation data initially sent the yield on 10-year Treasuries a modest three basis points higher, but by 2:45 p.m. in New York it was down two basis points at 1.462%. It has dropped 26 basis points from late March.

In stocks, flows to ETFs tracking small and value stocks have slowed since their March peak. The $45 billion Financial Select Sector SPDR Fund (ticker XLF), whose assets tend to benefit from a rising rate regime, saw the biggest exit since April on Wednesday. Despite three days of solid inflows, the $70 billion iShares Russell 2000 ETF (IWM) is still showing outflows for June.

“The reflation trade has held up so well since the 10-year peaked on March 31, and sectors like financials have clearly been telling a different story than bonds,” said Adam Phillips, managing director of portfolio strategy at EP Wealth Advisors. “Given this deviation, it wouldn’t surprise me to see the reflation trade take a bit of a breather here.”