Hitting a big level in markets used to mean something on Wall Street, but these days each bullish watershed makes an ever-smaller splash.

The Dow Jones Industrial Average at 30,000. The S&P 500, Nasdaq Composite, Russell 2000 and MSCI World at all-time highs. Financial conditions -- from credit spreads to interest rates -- easier than ever before.

In 2020, it’s just another week for a global-markets machine that has managed to keep humming through some of the largest shocks in economic history.

If global stocks finish November with the biggest monthly gain since the late 80’s, investors can rationalize it with the good news: A vaccine gets closer every day. The transition process to a new U.S. president has begun, and Joe Biden’s pick for Treasury secretary is known and trusted.

But the danger is that all this year’s drama may have desensitized the investing world, resulting in a rally which spits out records regardless of fundamentals. Complacency, not COVID-19, could be the new threat to returns.

“Markets are always forward looking and are currently prepared to look through short-term negative news in the knowledge that a strong economic recovery is looking much more assured following the recent vaccine news,” said Rupert Thompson, chief investment officer at Kingswood Holdings. Alongside a belief central banks will do whatever it takes, it means more resilience to shocks, he said. 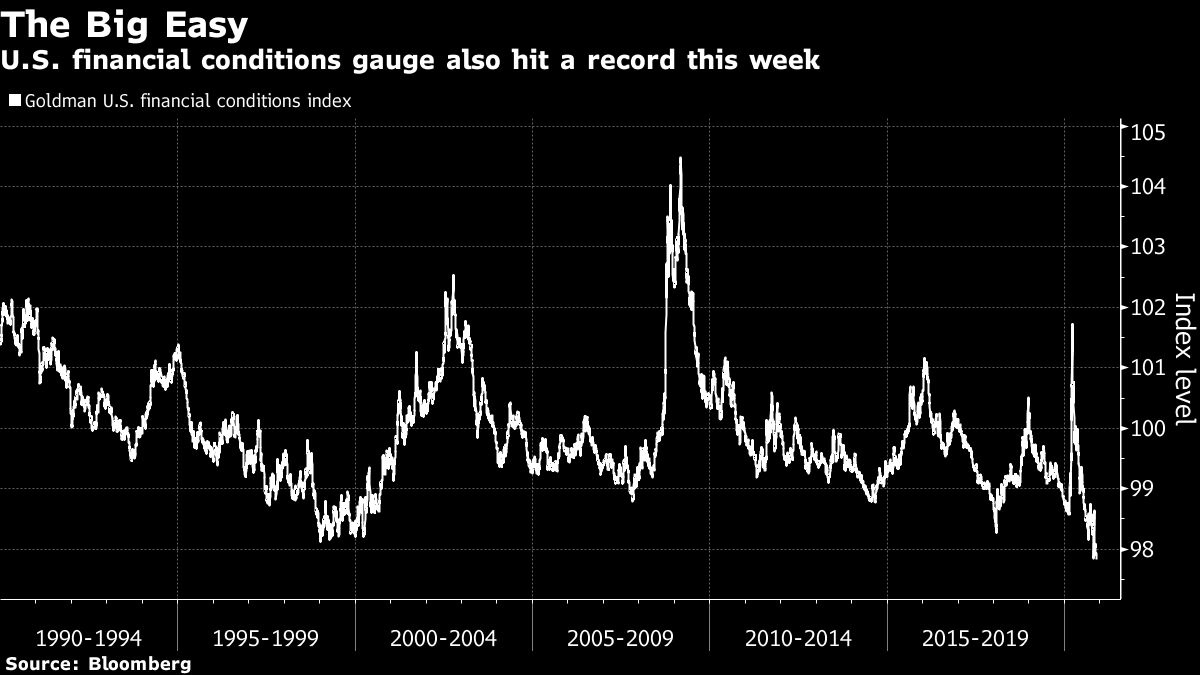 A rally on Wall Street defying despair on Main Street has been a feature of the pandemic roller coaster. The difference now is the rebound is getting powered by a broader range of companies rather than a few tech behemoths -- and potentially a lot more cash.

More than US$77 billion has been plowed into U.S.-listed equity exchange-traded funds in November, on course for a record. That has helped keep the three major American stock gauges at their all-time highs at the end of a week in which unemployment claims unexpectedly jumped, incomes fell and the coronavirus infection-rate accelerated.

The MSCI All-Country World Index added 2.3 per cent. The Stoxx Europe 600 Index gained a fourth week. All the while, virus cases topped 60 million globally and lockdown measures were extended in some of the world’s biggest economies.

“The near-term risk to growth, and risky asset prices, remains acute,” BCA Research strategists wrote in a note. “U.S. economic activity is slowing even before stricter control measures are imposed to prevent a collapse in the U.S. health care system.”

Despite this, the rally rolls on, with the bulk of bets being placed on assets heavily exposed to the economic cycle.

Sure, investors are front-running better economic news in 2021. But at this rate, positive news will be met with diminishing returns.

For example, on Nov. 9, Pfizer Inc.’s announcement that its vaccine showed a more than 90 per cent success rate spurred the Dow Jones Industrial Average to jump 3 per cent. Moderna Inc.’s 94.5 per cent success a week later was met with a 1.6 per cent advance.

Perhaps the prospect of one vaccine was enough, with investors adjusting for the majority of good outcomes after that first headline. But the moves are suggestive of a market that is potentially desensitized to even positive pandemic-related news.

“The high level of valuations both in fixed income and equities means a lot of good news is already priced in,” said Thompson at Kingswood.

Bullish conviction can be explained by another record notched this week: The easiest financial conditions in history, which are encouraging investors to gorge on risks everywhere.

Yields on the worst-rated junk bonds hit the lowest since 2014, even after the Treasury and Federal Reserve clashed and the central bank’s ability to backstop the credit market was reduced.

The Cboe Volatility Index is back at the lowest since February, while a gauge of bond volatility is not far from the lowest ever. West Texas oil has rallied above US$45 per barrel for the first time since March on hopes of a pickup in demand. The Russell 1000 Value Index is set to beat the Russell 1000 Growth Index for the third month running.

For all of these indicators of strong risk appetite -- perhaps because of them -- there remain small pockets where the cautious investor can be seen. The yield on 10-year Treasuries looks well-anchored below 1%. Demand for high grade debt saw the world’s stockpile of negative-yielding bonds hit a record US$17.5 trillion this week.

Meanwhile, a surprisingly large cohort is still late to the equity party. While discretionary managers are over-extended based on fundamentals, according Deutsche Bank AG, systematic traders have kept their exposures low.

All the more reason to be bullish, according to Citigroup Global Markets.

“One of the unappreciated risks to asset markets in the coming months could be a melt-up in equities,” macro strategists including Amir Amin wrote in a research note. “Our metrics suggest light positioning, in conjunction with a potentially potent risk appetite mix including: A loose Fed, further fiscal stimulus in the U.S. and reacceleration of the improvement of labour markets.”