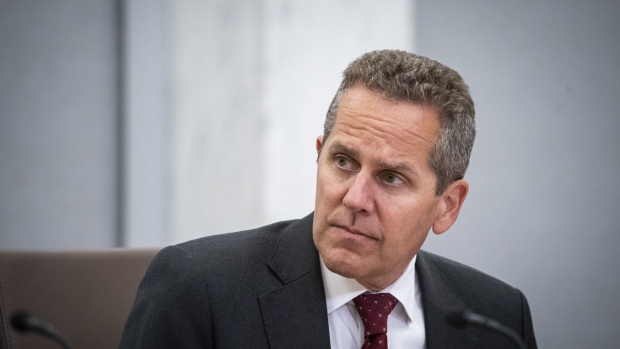 Michael Barr, vice chair for supervision of the Board of Governors of the US Federal Reserve, during a Fed Listens event in Washington, D.C., US, on Friday, Sept. 23, 2022. Federal Reserve officials this week gave their clearest signal yet that they're willing to tolerate a recession as the necessary trade-off for regaining control of inflation. , Bloomberg

(Bloomberg) -- The annual exams that test Wall Street banks’ ability to withstand market turmoil are poised for an overhaul.

The Federal Reserve is considering changes to take into account new forms of financial stress as part of a broad look at lenders’ capital requirements, the central bank’s head of supervision said Thursday. The exams affect how much banks can return to investors through dividends and share buybacks.

“We are currently evaluating whether the supervisory stress test that is used to set capital requirements for large banks reflects an appropriately wide range of risks,” Michael Barr said at an American Enterprise Institute event on Thursday. “In addition, we are considering the potential for stress testing to be a tool to explore different sources of financial stress and uncover channels for contagion that lead to unanticipated consequences.”

The amount of money that banks need to set aside has become a hot-button issue in Washington. Executives have been arguing that capital requirements stemming from stress tests can have an undue negative impact on their businesses.

In his Thursday remarks, Barr didn’t mention any firms by name, but did say that capital requirements were particularly important for big banks.

In June, the Fed announced that Wall Street’s biggest lenders all aced this year’s exams. The banks examined showed that they had enough capital to handle a cocktail of surging unemployment, collapsing real-estate prices and a plunge in stocks, the central bank said at the time.

In detailed remarks on the topic, Barr noted that bank capital is strong. However, a “holistic” review of requirements is necessary, he said.

“That review is still underway, and I have no firm conclusions to announce today,” Barr said.

He added that the ability of lenders to get through the shocks associated with the Covid-19 pandemic weren’t a good indicator because of the government’s emergency intervention.

After the collapse of Sam Bankman-Fried’s FTX, Barr spoke of the need for a regulatory system that balances guardrails with tech innovation.

“Thankfully, the risks to the core of the financial system have been pretty muted in the aggregate.”

(Updates with comments from Barr starting in sixth paragraph.)