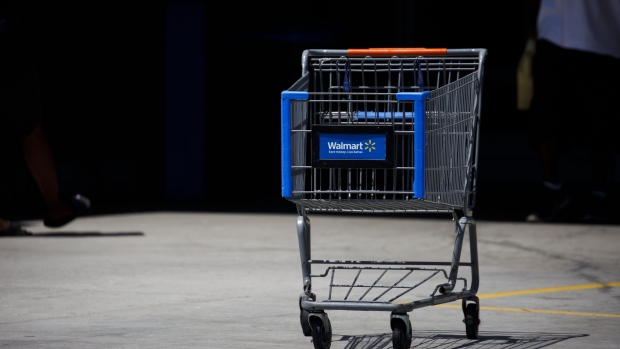 A shopping cart outside a Walmart store in Lakewood, California, U.S., on Thursday, July 16, 2020. Walmart Inc. will require customers to wear masks in all of its U.S. stores to protect against the coronavirus, an admission that the nation's pandemic has reached new heights and setting up potential confrontations with customers who refuse to don them. Photographer: Patrick T. Fallon/Bloomberg , Bloomberg

Walmart Inc. will recruit more than 20,000 workers ahead of the U.S. holidays to prepare for an expected surge in online shopping amid the pandemic, its first large seasonal hiring in five years.

The world’s biggest retailer is readying itself for a holiday e-commerce battle with Amazon.com Inc. by bringing on more seasonal staff to handle online orders at its U.S. distribution centers. The beginning hourly rate is US$15.75 and goes up to US$23.75, the company said in a press release Wednesday.

The two retail giants have attracted new consumers since the start of the COVID-19 crisis as consumers flocked to online options for products ranging from groceries to exercise gear and pet products. And Walmart recently introduced a subscription-delivery service, called Walmart+, to match the popular Amazon Prime offering.

“Over the past six months, our customers have been shopping differently,” said Scott McCall, executive vice president and chief merchandising officer of Walmart’s U.S. operations. “We expect that will continue into the most important shopping season of the year -- the holidays.”

Walmart, which had already hired more than 500,000 employees since March across its stores and supply chain, may face labor competition as the unemployment rate -- while still historically high -- drops from its pandemic peak. Amazon said last week it was hiring 100,000 full and part-time employees across the U.S. and Canada, offering starting wages of at least US$15 an hour. Other retailers have announced holiday staffing, such as craft-store chain Michaels Cos., with plans to add more than 16,000 employees.

In the battle for parent and grandparent shoppers, the retailer said it will have 1,300 new toys such as puzzles and Legos, along with 800 exclusive items.

The Bentonville, Arkansas-based retailer expects that many consumers will be starting their holiday shopping early, before the traditional kickstart of the season on Black Friday in November.