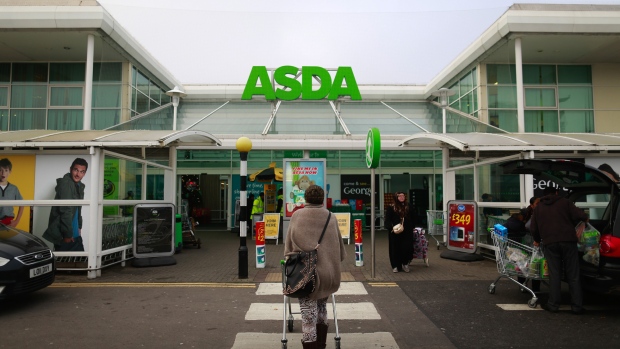 A customer pushes a shopping cart as she walks towards an Asda supermarket, operated by Wal-Mart Stores Inc., in the Wembley district of London, U.K. , Bloomberg

Walmart Inc. (WMT.N) is exploring options for its Asda unit including an initial public offering after plans to combine the business with J Sainsbury Plc to create the U.K.’s largest supermarket chain collapsed, according to people familiar with the matter.

In addition to a potential listing, the U.S. retailer may also revisit a sale, though interest from private-equity firms has so far been lukewarm, said the people, who asked not to be identified because discussions are private. Walmart plans to take its time to analyze the most feasible strategy for Asda and could opt to keep the business, one of the people said.

A spokeswoman for Asda declined to comment. A representative for Walmart didn’t immediately return a phone call and an email outside regular business hours.

Sainsbury and Asda on Thursday dropped their 7.3 billion-pound (US$9.4 billion) combination after antitrust authorities blocked the deal, saying it would lead to higher prices and less choice for shoppers. The companies quickly abandoned the transaction after the Competition and Markets Authority formally rejected the combination of the country’s second- and third-largest grocery chains.

"Our focus now is continuing to position Asda as a strong U.K. retailer delivering for customers," Judith McKenna, chief executive officer of Walmart International, said in a statement after the Thursday ruling. "Walmart will ensure Asda has the resources it needs to achieve that."

“Walmart has never seen Asda as a problem child,” Sanford C. Bernstein Ltd. analyst Bruno Monteyne said by phone. “They aren’t as desperate to get rid of it as others have suggested. It’s trading well and making profit and won’t be as attractive to private equity as it was for Sainsbury’s because of the great synergies they would have created.”

--With assistance from David Hellier