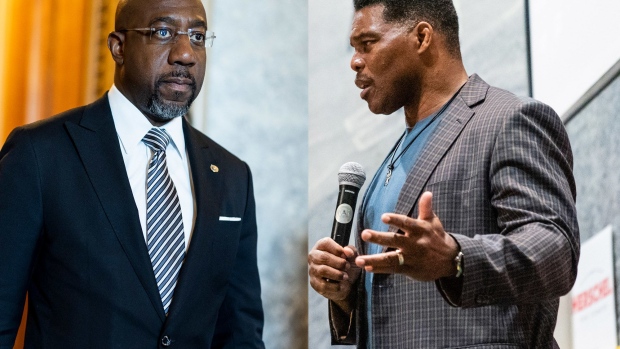 Herschel Walker, US Republican Senate candidate for Georgia, speaks during a campaign rally in Macon, Georgia, US, on Wednesday, May 18, 2022. Heisman Trophy-winner Walker is vying to face incumbent Democratic Senator Raphael Warnock in his first political run. , Photographer: Bloomberg/Bloomberg

(Bloomberg) -- US Senator Raphael Warnock of Georgia has opened a double-digit lead in his bid for re-election next month against Republican challenger Herschel Walker, a new poll shows.

Warnock,  a first-term Democrat and pastor of Atlanta’s Ebenezer Baptist Church, leads Walker by 50% to 38%, according to a poll of 1,076 likely voters taken from Sept. 30 though Oct. 4 by Survey USA for an Atlanta-based television outlet. Previous polls showed the race to be much closer or even statistically tied.

A former football star and longtime Donald Trump acolyte, Walker has also in recent days been publicly criticized and called a liar on social media by his 23-year-old son, Christian.

Walker’s support is especially weak among women, according to the poll. Although male voters were evenly split on the two candidates, women favored Warnock by a margin of 29 points. The poll, conducted for WXIA TV’s “11 Alive” news, has a margin of error of 3.7 percentage points.