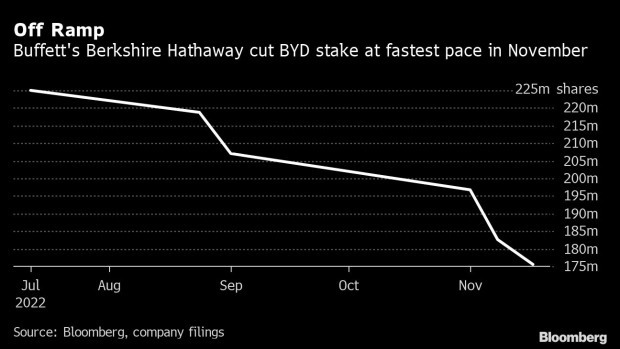 (Bloomberg) -- Warren Buffett “loves” China’s biggest electric-vehicle maker BYD Co. and isn’t abandoning it, a senior executive from the company said, despite the legendary investor’s Berkshire Hathaway Inc. offloading more than a fifth of its stake this year.

“It’s very natural for him to get some returns — cash out,” BYD Executive Vice President Stella Li said in an interview Tuesday, in the first high-level public comments addressing the selldown of Buffett’s long-held stake in the company.

BYD shares jumped 6.9% in Hong Kong on Wednesday morning, hitting their highest since September and among the top gainers on the Hang Seng Index.

Berkshire, which first invested in BYD in September 2008, disclosed in August the first known sale of some of its stake, held in the automaker’s Hong Kong-listed shares. The selloff accelerated in November, paring its holding to 15.99% from an initial 20.04% and raising questions about Buffett’s long-term commitment to the Shenzhen-based company.

“I don’t feel this is any indication he’s abandoned BYD,” Li said. “He loves BYD, he loves management” and will “always be” the biggest supporter of the company, she said.

A spokesperson for Berkshire didn’t immediately respond to requests for comment.

BYD’s shares have fallen about 30% in Hong Kong since a Berkshire-sized stake appeared in the Hong Kong exchange’s clearing system on July 11, fueling the initial speculation that Buffett may sell his holding. The slump has wiped about HK$230 billion ($30 billion) from BYD’s market value.

The investment has still been a big winner for Berkshire and Buffett. An initial $230 million outlay has ballooned more than 1,570%, and even after the selldown Berkshire’s remaining stake is worth around $4.5 billion.

In other highlights from the interview, Li said:

--With assistance from Max Reyes and James Attwood.