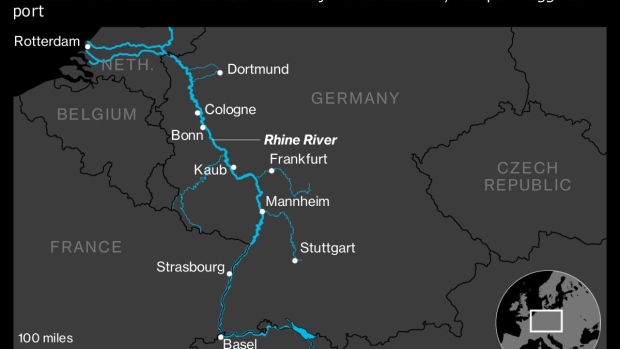 A visitor walks along exposed rock on the shoreline of the River Rhine near Pfalzgrafenstein castle in Kaub, Germany, on Thursday, Aug. 4, 2022. An extended dry spell at the Rhine -- a key hard-coal import route -- risks choking Germany's energy supply further, stoking power-price volatility and elevating costs for coal-heavy generators, such as EnBW and Uniper. , Bloomberg

(Bloomberg) -- The water level at a key German waypoint on the Rhine River is forecast to rise above a critical level this weekend, potentially bringing a sliver of relief for shippers of vital commodities through inland Europe.

The marker at Kaub, a chokepoint on the river to the west of Frankfurt, will hit 41 centimeters (16.1 inches) on Saturday morning local time, rising to 49 centimeters early on Sunday, according to German government data. When the water level is 40 centimeters or below, it is uneconomical for many commodity-hauling barges to sail through.

Shallow waters restrict how much the barges that traverse the river can carry.

A reading slightly above 40 centimeters at Kaub does not mean that barges can sail through uninhibited -- there will still be severe restrictions on how much cargo vessels can carry. Earlier on Wednesday, the measure at Kaub was 34 centimeters.

The Rhine is used to ship millions of tons of fuel and other vital goods through inland Europe. The water levels are not the actual depth of the river, but are used as measures for navigability.

Germany’s government is now moving to speed up a long-discussed effort to deepen the Rhine at strategic points, transport minister Volker Wissing said on ARD TV earlier on Wednesday. At the same time, more investment is being made in the rail and road network, he said.